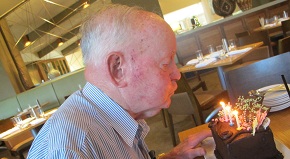 On Sunday, my dad Jack turned 90. We celebrated his birthday with a family lunch. And it made me think about what makes a good parent, a good life and a strong family.

Jack (or Harold John Scott Richards as his birth certificate shows) was born on 6 January 1923 in Broken Hill. He was one of four boys and three girls born to Harold and Ruby Richards. Soon after his birth his father became manager of Mt Leonard Cattle Station, 110 kilometres east of Birdsville. You don’t get more outback than outback of Birdsville.

Summers were hotter than hot, days long and work on the cattle station hard. Dad was sent with two of his brothers to board at the Birdsville Pub in order to attend the local school. After hours meant chores at the pub to earn their keep. He left school at 13, worked on various cattle stations and when World War II broke out, joined the airforce by forging his father’s signature because he was underage. (You can see the forgery in the war records online!)

He trained in Queensland and was then sent to Borneo to service aircraft in the war against the Japanese. On leave in Melbourne he went to a dance and there he met Betty, who was, and still is, the love of his life. After the war they married, Dad retrained as a carpenter and worked long and hard to support his family, Betty, Ken and myself. As a father he taught us the importance of doing things for other people, that hard work is the answer to most problems, and that there is no substitute for constant love.

If my Dad has a fault, it is that he simply cannot believe my brother and I have any faults. He is so one-eyed about us it is embarrassing. And he is worse about his four grandchildren who he thinks are the most gifted young adults around. But as his daughter, all I can say is that this unconditional love is a rare and very special gift and I hope I have learned, from Jack, to pass it on.