Former Australian Prime Minister Bob Hawke has stated that, while he thinks Tanya Plibersek is a “very impressive representative”, she may not be a candidate for Labor leadership because she has a three-year-old child.

Mr Hawke’s number one choice for the leadership is reportedly Bill Shorten who, as many equal rights groups have pointed out, is also the proud parent of a three-year-old.

It is understood that Caucus will meet at midday on Friday to debate the Labor leadership, although it is unlikely that a decision will be reached.

A social media campaign to encourage Ms Plibersek to put herself forward as a leadership candidate began after Labor’s election loss on Saturday. The hashtag ‘Plibersek16’ has been circulating, supporting her as a possible Labor leader. However Ms Plibersek told the ABC’s Q&A program on Monday night that she would not be including her name in the Labor leadership ballot.

The controversial comments from Mr Hawke have only spurred Ms Plibersek’s supporters on, as Destroy the Joint’s meme (pictured below) has gone viral. Mr Hawke did, however, concede that Ms Plibersek “could be a candidate for the deputy”. 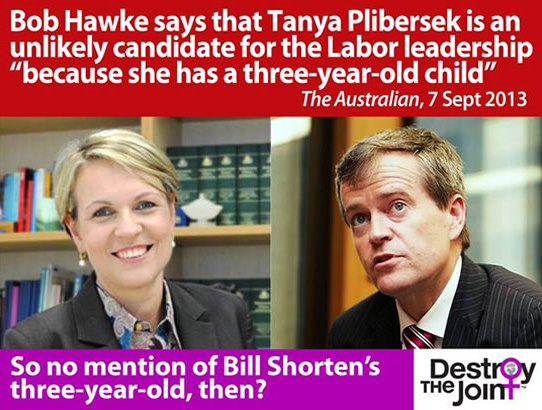 Read more about Bob Hawke’s opinions on the Labor leadership at the Sydney Morning Herald website.

It almost seems as though Bob Hawke was worried about the poor, newsless journalists when he made his remark about Ms Plibersek’s ability to run for the Labor leadership on election night. Or perhaps he was just trying to keep Tony Abbott’s face off the front page.

What a load of codswallop. What a crock. For Mr Hawke to suggest that Ms Plibersek’s three-year-old child should hold her back and then in the same breath to name Mr Shorten as the best candidate for the leadership is, in this day of ‘equality’, so old-fashioned and short-sighted it’s almost unbelievable. That is because, apart from the obvious, Ms Plibersek actually has three children under the age of 13. She has been in politics since before any of them were born, and they certainly didn’t affect her ability to manage a $5.1 billion health portfolio as a cabinet minister in the Labor government.

If that wasn’t enough, you can read more from the feminist perspective on the Women’s agenda website.

I’m going to cut my ‘feminist-lefty’ rant short, because I actually think there are two important points which have been missed in the scramble to protect Ms Plibersek’s political honour.

The first is that Mr Hawke’s comments highlight another type of sexism which is rife in modern-day Australia, particularly within the political scene. His comments suggested that, while being a mother should be overwhelmingly important to Ms Plibersek, being a father shouldn’t really have an impact on Mr Shorten’s life. What if Mr Shorten was planning to take paternity leave in the foreseeable future? Or what if he just wanted to be there for his child, instead of working long hours and never really getting to be a father? Mr Hawke’s comments failed to acknowledge Ms Plibersek’s professional equality, but they also failed to acknowledge Mr Shorten’s equality as a parent.

The second is the typical blogger response to this issue. A number of different writers who have condemned Mr Hawke’s comments have also forgiven him because, ‘Bob Hawke is in his 80s’. That is one of the most casually ageist comments I have ever read. Being over 80 does not mean that Mr Hawke is suddenly forced to stop thinking for himself. Growing older doesn’t mean he suddenly stops learning, or that his opinions stop growing and changing. Mr Hawke is a clever guy – you can’t be Prime Minister of Australia if you’re a complete duffer. To suggest that the only reason he holds an opinion is because of his age is both dismissive and, I feel, undermines his views on every subject (even if I do think what he said about Ms Plibersek was both sexist and just plain wrong).

What do you think? Does having a three-year-old make Ms Plibersek a poorer candidate for the Labor leadership? And can we really take Mr Hawke’s comments seriously? He is over 80, after all…