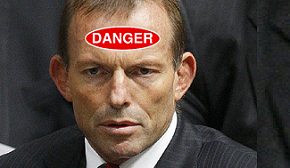 Two new polls have shown an increase in support for both Prime Minister Julia Gillard and her party whilst Opposition leader, Tony Abbott, is facing a strong decline in voter approval.

Ms. Gillard now has the biggest lead over Mr. Abbott in the past 16-months, polling 14 points ahead as preferred Prime Minister.

Opposition frontbencher, Christopher Pyne said that these ratings are a direct result of Labor’s campaign to ‘demonise’ Mr. Abbott, asserting that “Labor has decided to reach for the chum bucket in their campaign to denigrate Tony Abbott, rather than focus on the issues that people care about …” The ALP’s primary support increased three percentage points to 36 per cent as the Coalition’s went down five points to 41 per cent – the lowest since March last year. On a two-party-preferred basis, Labor and the Coalition are now even with 50 per cent each.

The poll comes after a week of robust debate around the facts of a scuffle during Mr. Abbott’s time as a student organiser at Sydney University. Writer David Marr has repeated allegations of Mr. Abbott’s physical intimidation of a female competitor just after an election for the Students Representative Council. Mr. Abbott initially claimed that he could not remember the incident. Shortly afterwards he stated that it did not occur.

Watch ABC discussion of these results

Read the detail of The Age/Nielsen poll

Opinion – Should you be judged on your younger self?

The polls seem to be turning for Mr. Abbott. The interesting questions are whether this is simply because of recent articles revealing the ‘younger’ Tony, in particular his behavior during his time in student politics – or whether it is a longer-term trend based on his current performance. The two polls mentioned above were conducted as journalist David Marr’s article in the Quarterly Essay , Political Animal, the making of Tony Abbott was published. Did this essay influence the results? I doubt it. The Liberal Party has claimed a Labor ‘dirt unit’ is at work. Yet allegations about Prime Minister Gillard’s relationship with a colleague 20 years ago were apparently fair game in Parliamentary Question Time when Mr. Abbott took the stand. It is worth remembering that David Marr also wrote the article on former Prime Minister Kevin Rudd, Power Trip, which revealed the division within the Rudd Cabinet and was seen by many as the beginning of the end for Rudd’s primeministership. Was he then part of a Liberal Party ‘dirt unit”? Once again, unlikely.

So where does this leave us? Is disapproval for Mr. Abbott only about his youthful aggression? Or is it about his current actions? I think it’s actually got a lot to do with his relentless negativity. In days gone by, when Malcolm Fraser and Paul Keating were heading the country, there was a much stronger display of bi-partisanship from the oppositions of the day – including those led by arch rivals of Fraser and Keating,  Gough Whitlam and John Howard. Landmark legislation on refugees and economic reform was voted through the house with general agreement that this legislation was necessary for the common wealth, in the true sense of this term. When Mr. Abbott became Opposition Leader he claimed his job was to oppose – everything. This is simply wrong. His job is to win government – but not to knock back each and every piece of legislation introduced. I think Mr. Abbott’s actions as a student can be noted, but they do not influence my vote. What does influence me is his attitude. Which remains negative, arrogant and unconstructive. There is no place for this attitude in the Lodge.