Why mandatory retirement ages should be a thing of the past

Mandatory retirement ages are – rightly – mostly a thing of the past in Australia. But they still linger both formally and informally in some sectors and roles. This is of major concern for a country with an ageing population, such as Australia.

Compulsory retirement ages have been progressively prohibited in Australia since the 1990s. There are good reasons for this: reliance on irrational stereotypes about older workers can prevent businesses from finding the best person for the job. Allowing workers to choose when they retire can improve staff retention, increase workforce morale, and help employers retain vital skills and experience.

At a national level, prohibiting mandatory retirement can help relieve the burden of an ageing workforce on pension systems. It also promotes labour market supply and removes barriers to older people participating in society.

Abolishing mandatory retirement can reduce welfare expenditure and increase self-reliance. Importantly, it recognises the inherent worth and dignity of workers of all ages, and sends a strong national message about the importance of ending age discrimination.

Federal Australian judges must retire at the age of 70, as outlined in section 72 of the Australian Constitution. While section 72 does not generally apply to state or territory courts, all states and territories also impose a retirement age for their judges. These range between ages 65 and 72.

The Australian Defence Force has also maintained a mandatory retirement age of 60 for personnel and 65 for reservists, though this can be extended on a case-by-case basis. 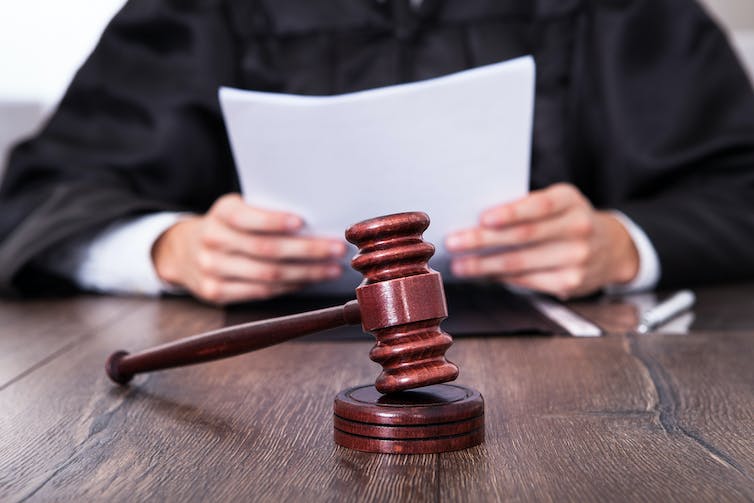 In Australia, federal court judges have a mandatory retirement age of 70. Shutterstock

Retirement provisions have been retained by some UK universities, including Oxford and Cambridge. These organisations have claimed that retirement ages are justified by very low turnover, which may limit progression for other staff. They also cite the need to increase staff diversity, refresh the workforce, and facilitate succession planning.

Extending academics’ working lives may be affecting the employment prospects of younger academics, particularly in relation to the availability of permanent academic posts at junior levels. Overall, though, there have been few negative impacts from the removal of mandatory retirement ages in universities.

I found Australian universities value the experience and skills of their older academic workforce, and explicitly reject any link between age and declining performance.

Even for the judiciary, mandatory retirement ages are outdated and inefficient. When they were introduced at the federal level in 1977, retirement ages were intended to “contemporise” the courts by introducing new people and ideas. They were designed to prevent declining performance on the bench and provide opportunities for younger judges.

But the workforce and our attitudes to older workers have changed since 1977. My research found that mandatory retirement ages for judges are inconsistent with modern workplace practices and are contrary to the desire for age equality. There is no evidence that older judges are “out of touch”, and age is a bad predictor of individual capacity.

Instead, judicial retirement ages may deprive the courts of expertise and experience. Retirement ages also appear to be contrary to the wishes of judges themselves. Justice Graham Bell, who retired from the Family Court of Australia on 20 February 2015, was quoted as saying:

These days 70 is equal to 60 or 55. … Judges should be able to go on till 80 provided they pass a medical inspection. After all, the pension makes judges pretty expensive creatures in retirement. They are sent out to pasture too early.

What’s more, judicial retirement ages are largely unnecessary in practice. Judges are entitled to generous pensions and often retire of their own accord. New judges will still be given opportunities even if we remove mandatory retirement ages.

Where mandatory retirement has been officially removed, there can still be pressure to retire at a certain age. My research found that some Australian universities may be using potentially discriminatory methods (such as redundancy) to manage an ageing workforce.

Given these findings, in 2016 the Australian Human Rights Commission (AHRC) conducted a national inquiry into discrimination against older workers. It recommended a suite of changes including discrimination law reforms and appointing a cabinet minister for longevity.

Read more: Age discrimination in the workplace happening to people as young as 45: study

Previous studies have suggested that declining numbers of older men in the workforce are mostly due to employer constraints, not constraints on the part of older workers. This suggests the need for a shift in employers’ attitudes towards older workers, to encourage continued participation.

Why mandatory retirement ages are inefficient

With an ageing population, Australia cannot afford to lose skilled workers prematurely. In 2013, the Productivity Commission estimated that overall labour supply per capita will fall by nearly 5 per cent by 2059–60 due to demographic ageing. The commission concluded that:

A period of truly diminished outcomes is likely to be at hand, unless luck or appropriate policy initiatives intervene.

One of the key policy measures available to address this looming issue is to increase workforce participation rates for older workers. Eliminating the last vestiges of mandatory retirement is an obvious first step.

More From: Timing Your Retirement

Making the transition to retirement

Surprising things about retirement that no one tells you about before you retire.

David is suffering MS, but is worried he won't be able to get the disability pension.

Your loss is also your gain

Six things you no longer need in retirement that will save you money.