About 5.5 million baby boomers – people born between 1946 and 1964 – have either reached retirement age or are closing fast.

What do we know about these older Australians – their financial and personal situations, their fears, their aims?

The overwhelming reasons for retiring were health (43.64 per cent) followed by the availability of work (24.27 per cent).

Almost one-third of respondents were on a full Age Pension (32.19 per cent), with almost another third on a part-Age Pension (30.64 per cent), while 26.75 per cent were self-funded retirees. 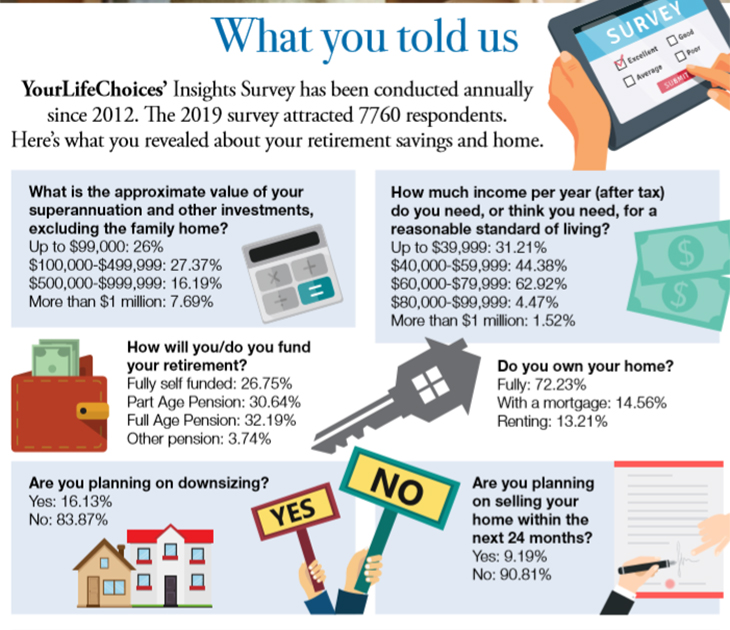 However, for all those older Australians with the bulk of their wealth locked in real estate, a key concern was maintaining their current lifestyle as they age. In YourLifeChoices’ 2019 Ensuring Financial Security in Retirement Survey, almost one-third (33.2 per cent of respondents) admitted they were somewhat concerned and 11.77 per cent said they were very concerned about their ability to continue to finance their lifestyle.

In the same survey, YourLifeChoices respondents were asked about the importance of aged care planning. While 62 per cent said it was either important or very important, almost half said they had no idea how much they would need to contribute to aged care.

Which brings us to the importance of the family home – on both financial and lifestyle fronts. In addition to the monetary value of this asset, a significant percentage of older Australians say they want to age at home and – as evidenced by our Insights survey – have no plans to move any time soon.

Many older Australians have made superannuation payments only since it became compulsory in 1992, yet they have also ridden a wave of growth in property values. Their home is their castle, but they also need a reliable income stream.

Credit Suisse’s Global Wealth Report puts the median net wealth of Australians at $271,000 per adult – the highest in the world – but it says that more than a third of our population aged 65-plus are living in relative income poverty in retirement – the second highest rate in the OECD.

While such strategies as the Pension Loans Scheme, reverse mortgages and downsizing may suit, the door is open for other products to release equity in the family home. Watch this space.

This is an edited version of an article that first appeared in the March 2019 Retirement Affordability Index.