It wasn’t the first time I’d crashed a film set. My first was the 1984 film The Coolangatta Gold. You’ll recognise me in one of the shots because I’m the only person wearing jeans on a beach.

Many years, and many film sets later, I heard from a friend who was working on a movie that mixed cute furry farm animals with state of the art technology. I knew instantly I had to get smuggled on this one.

That film is now one of the most cherished children’s classics of the ’90s – Babe. It has been 25 years since the talking pig first appeared on international screens, and revisiting the film today shows it has not lost any of its charm or wonder.

Directed by Chris Noonan and starring James Cromwell and Magda Szubanski as farmers Mr and Mrs Hoggett, Babe made over $US250 million ($A351 million) at the international box office. It spawned a (much less successful) sequel, Babe: Pig in the City in 1998.

The story of a young piglet raised by a border collie to become a sheep herding star was a crowd favourite not just because of the cute animals, but because of the dazzling technology, which makes these animals look like they really are speaking.

With its story of achieving in the face of adversity, coupled with simple lessons – cooperation is better than intimidation, you can aspire to more than what others expect of you – Babe still appeals to both adults and children alike.

Hollywood is here
I’d never heard of the book the film was based on, The Sheep Pig by Dick King-Smith, so at the time I went looking for the Babe film set I knew next to nothing about the story apart from the fact that it featured talking animals.

When I got to Bowral, NSW, no-one could resist telling me Hollywood had come to the region. Ask anyone where Babe was filming and they pointed along the road to Robertson, a 25-minute drive east, through gentle hills and valleys surrounding a small village. 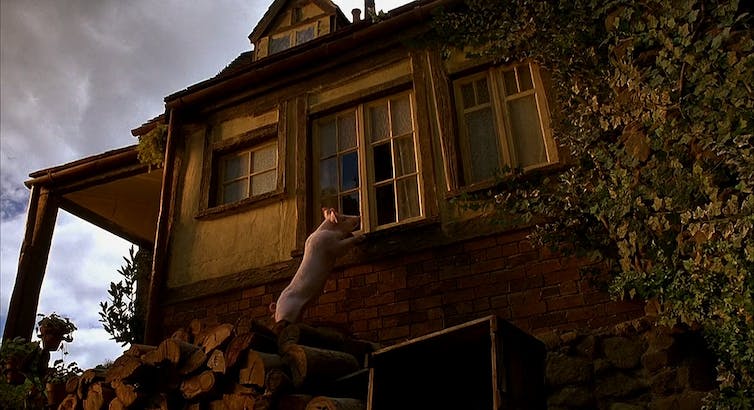 The Hoggett’s farmhouse looked like it sat perfectly in the landscape. But, of course, it was only a set. Universal Pictures

It was not long before the conglomeration of film trucks, tents and trailers came into view. But the thing that really caught my eye was the pens full of animals – dozens of sheep, chickens, cows, dogs and pigs.

Because filming took months, the production needed to constantly bring in new baby animals – the ones they filmed one week would soon grow too large and need replacing.

I was used to the hustle and bustle of a hot set, but this was like a circus.

Taking risks
Why was Babe such a massive worldwide hit? It wasn’t the first film to feature talking animals. Disney had made an industry out of this with The Jungle Book, The Lion King and, of course, Mickey, Minnie and Donald.

The combination of computer graphics and animatronics used in Babe is common now, but 25 years ago it was cutting edge and known only to a few specialists: the movie even beat Apollo 13 for the Oscar for best visual effects.

Still, while Babe was a film big on technology it didn’t let the multi-million-dollar special effects get in the way of the story and characters. The heart of the story is always the animals.

Children feel a strong bond to the animals in the film because they are portrayed as child-like themselves. In Babe, the central character is a piglet and speaks with a child’s voice. He has a sense of innocence and wonder. 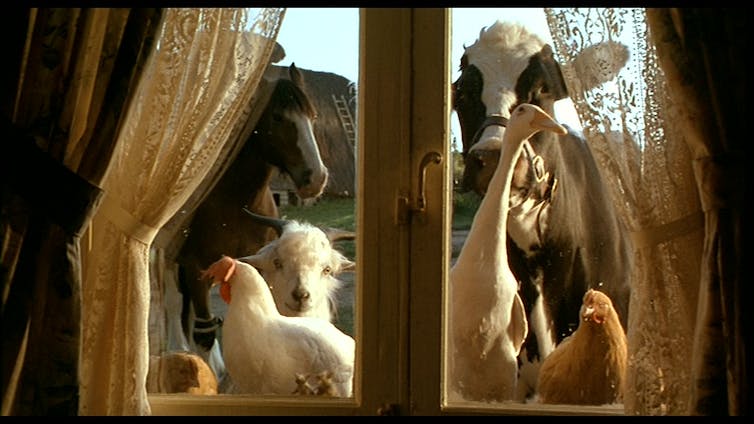 As a kids’ movie, Babe, also took big risks. The pigs, sheep and cattle on Hoggett’s farm were explicitly meat animals, and at one point wild dogs kill a sheep – dark concepts for small children.

The scene where Babe is told humans eat pigs is particularly disturbing for younger viewers. But these risks are handled sensitively, and pay off.

It has even been said these scenes sparked positive arguments for animal rights: Cromwell became vegan after filming, and PETA calls it “a classic animal rights movie”.

Out of time
I think why the film was embraced internationally was because it isn’t what we would classify as an ‘Australian’ film. There’s very little in it that defines it as ‘Aussie’.

Hoggett’s farm looks more Dorset or Devon in the south of England. There are no kangaroos or koalas, there’s no red-dirt ‘outback’ in sight. Even the accents are a global mish-mash. Babe doesn’t belong to any one time or place. 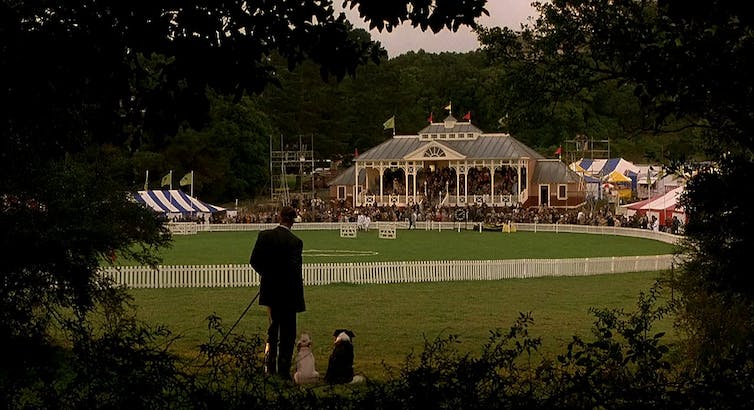 The film resonates because it stands apart from time and place. Universal Pictures

Audiences of all nationalities could enjoy it because it was truly international. Ultimately, though, Babe stays in our hearts and minds because it was a good story, well told. Do we really need anything else? That’ll do, pig, that’ll do.

Have you ever watched Babe? How do you think the childhood classic has aged over the past 25 years?

While We're Young is a light-hearted yet meaningful romp through the ages and stages of life.

Big books you finally have time to read