As has been discussed in so many articles, sharing our lives with pets is good for our health. Not only do they make us healthier in normal times, in stressful times the benefit of a pandemic puppy (or cat), or other non-human companion, goes even further.

Read more: When pets are family, the benefits extend into society

During a pandemic, people can be stressed and fearful for their lives and the lives of those they love. Research has shown that where there is a bond between human and animal, the presence of a non-human companion — especially a dog — decreases psychological arousal and stress, and creates physiological changes that make us feel better.

Pandemic pets
Early in the COVID-19 pandemic there was pet abandonment in large numbers in Wuhan, China. Fearful that the same would happen locally, many animal rescue organisations set out to empty their shelters. Worldwide there was an unprecedented upsurge in adoptions and fostering.

Although many people did this for the animals, they, perhaps unwittingly, set themselves up for better mental health during the pandemic. Aside from the stress-mitigating impacts of pets mentioned above, having a pet may be a powerful influencer in maintaining health-protective behaviours, such as eating well or going out for a walk.

Dogs and cats can increase physical rehabilitation goals through behaviour such as “bending, reaching, ambulating and using both arms in a functional manner to provide food, water, and grooming”. These basic activities involved in animal care actually provide exercise, which is very important for people who spend the day in a stationary position. 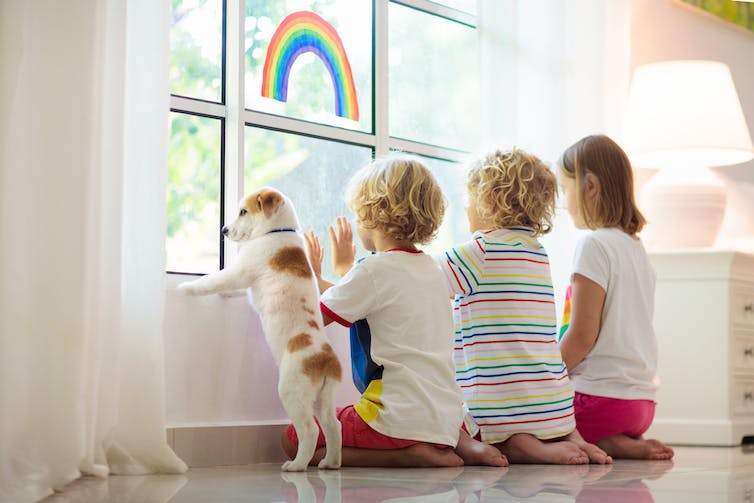 With stay-at-home orders required in many places, having a pet at home can help reduce feelings of anxiety and frustration. (Shutterstock)

Human-animal relationships
When the COVID-19 pandemic began, I had just started a research study asking people about their relationships with their non-human companions. The preliminary results of this online survey include people between their late 30s and early 90s. They live in Canada, the United States, England, Ireland, Wales and Scotland and come from all walks of life. One-third have completed high school or less, 30 per cent completed college and/or an apprenticeship and the rest completed some kind of university degree. At the time of the survey, almost all of them were spending their time at home, some were alone, others with family and for others pets were their only companions.

When asked, in an open-ended question, what it has been like having animal companions with them during the pandemic, their answers included words like “comforting,” “good/great,” “helpful”. Several people said that they work full-time, so they were enjoying the time with their animal and getting to see what their pet does all day. Several people indicated that they would be lost without their pet.

One participant said, “I don’t know what I would do without the company of my dog, she has kept me going.” Another said, “It is the only thing that is keeping me sane.” And others said the presence of a pet was salvation (a life saver) and brought joy. There were also those who said they talk with their pet and that it helped stave off loneliness.

Artificial pets?
Another question I ask in my research is whether robot pets can be used to replace live animals, so it was interesting to see that robot pets were being provided to older adults during the COVID-19 pandemic.

When asked why, they said things like, “It is not about the companionship alone. It is about the emotional connection. To get that from a robotic creation is not love. We need the love that comes with these pets.” It was very clear that the robots were “not the same as a living breathing animal”. That a robot could not take the place of a pet because pets are “unique and make me smile and love them”.

The results of this survey are similar to those found during non-pandemic research: pets stave off loneliness, and living with pets helps people to be more active, even if it is only the movement associated with basic tasks, such as cleaning the litter box or filling food bowls. Most importantly, we are comforted by these non-human companions. The presence of a dog or a cat in the home may be the only thing between an isolated person and despair.

Given how important dogs, cats and other non-human companions are to our wellbeing, it is important to remember them when developing programs to support isolated people. When there is not enough money to go around, “it is not unheard of for people to feed their dog before they feed or acquire medications for themselves”.

As the economic reality of sustained unemployment unfolds, it is important for public services to consider not only food security for humans, but also for their non-human companions in order to prevent the possibility of a tsunami of pet abandonment due to an inability to provide care.

The ‘beast’ that is stalking us as we battle COVID-19

If you're feeling stressed and confused during these challenging times, you're not alone.

Are you guilty as charged of these beauty 'sins'?

Blue eyeshadow, hair mascara and fake tan - where the quest for ‘beauty' took us over the

What it means when your heart skips a beat

Heart palpitations; harmless, or a sign of something more sinister?

In accordance with indexation, Age Pension payment rates will increase as of 20 March 2021, but today, we can help...

Rent Assistance rates and thresholds will increase on 20 March 2021. Find out what the new payment rates and limits...

Changes to income and asset thresholds will take effect from 20 March 2021. Below are the new limits that will...

Even if you’re not eligible for any benefits from Centrelink, you may qualify for a Low Income Health Care Card...

Changes to JobSeeker rates and thresholds

From 20 March 2021, JobSeeker rates and thresholds will be indexed. Find out if your payment will be affected. JobSeeker...

Age Pension and supplements set to increase this month

More than five million Australians have received welcome news with an increase to their social security payments from 20 March...

Financial planners know they need to build trust with retirees