A recent widely-reported study has reignited debate around whether omega-3 supplements reduce the risk of heart attack and stroke. The study showed a particular form of omega-3 oil lowered the risk of people with heart disease experiencing a major “end point” event by 25%. This end point is one or a combination of several serious issues such as fatal or non-fatal heart attack, stroke, angina (chest pain) and coronary surgery.

The REDUCE-IT trial included more than 8,000 participants and was presented at the American Heart Association Scientific Sessions in Chicago and published in the New England Journal of Medicine. It was the largest randomised controlled trial (where one group is given the intervention tested and another a placebo and the results are compared) performed to-date testing the benefits of omega-3 supplements for heart disease.

But before you buy fish oil supplements from the local pharmacy, there are some things to be aware of. The drug tested, Vascepa, wasn’t a standard over-the-counter fish oil capsule. Vascepa is made from a highly refined component of fish oils (icosapent ethyl) and the participants received a very high dose (4 grams per day). This is far more omega-3 than most people take with fish oil capsules. Vascepa is available on prescription in the US but not everywhere, and not in Australia.

Nevertheless, it was a pretty good study performed by reputable investigators across 11 countries with convincing results. So, what does this mean for the see-saw of advice offered on whether to take or not to take fish oil supplements to prevent major heart issues?

A bit of history
In the early 2000s medical authorities were recommending fish oil supplementation for people who had experienced a cardiovascular event such as a heart attack or stroke.

In 2017 the American Heart Association was more circumspect, noting that the dramatic benefits seen earlier were less evident in subsequent trials. But supplements were still recommended for certain people with heart or vascular disease.

By early 2018, the tide seemed to have turned completely as a widely publicised study concluded there was little evidence for the benefit of fish oil supplements in preventing heart disease. The study was a systematic review, which combined the results of ten trials testing fish oil supplements (at a lower dose than the REDUCE-IT trial), involving 77,917 older adults at high risk of cardiovascular disease.

So, what’s the verdict?
The trials in the systematic review varied widely in design, dose, patient population, end points and the validity of lumping them all together is questionable. Also, finding no evidence of benefit is not the same as finding no benefit, particularly in some people under certain conditions that may be lost in the overall analysis. Plus, the results are not just a reflection of the treatment under examination but also of the quality of the studies included.

REDUCE-IT was funded by the manufacturer. There is no other way it would have been done and if the results stand up it could save millions of lives, but some will question the veracity of the findings because of the funding source. So, all of this leaves certainty of whether supplements are good for heart health up in the air. 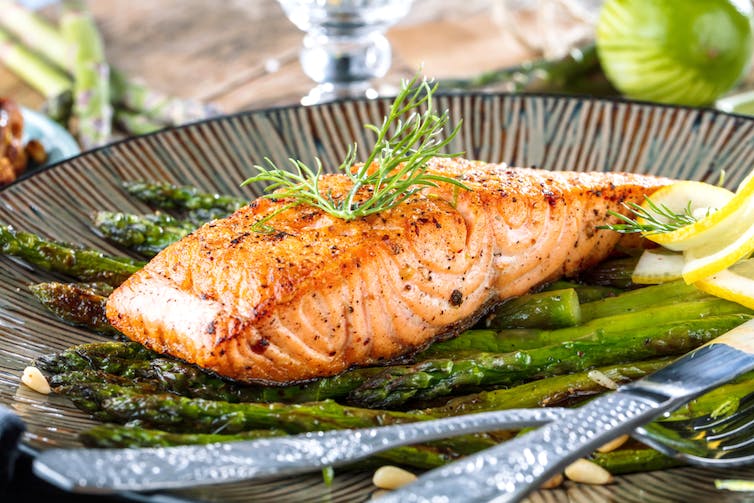 It’s still a fact that cold water fish are good for you. from shutterstock.com

Fortunately (and as far as we know) some “truths” remain. Eating fish is still good for you. The origin of the fish is important, not only to avoid contaminants but also because the omega-3 content and relative amounts of EPA and DHA varies. Cold water, oily fish such as salmon, sardines, mackerel, trout and tuna contain the most.

If you cannot eat fish, there are plant sources of omega-3s found in some nuts and vegetable oils such as canola, chia, flaxseed, and soy. These have not been studied as extensively as those of marine origin.

Read more: How Australians Die: cause #1 – heart diseases and stroke

Omega-3s including over the counter capsules have definite biological effects. They reduce triglycerides (the type of fat that contributes to hardening of the arteries) and the risk of blood clots, and are anti-inflammatory. These changes are mostly seen at higher doses.

The evidence will evolve further but, in the meantime, and based on a recent evidence review, the National Heart Foundation recommendations don’t advise health professionals to routinely recommend omega-3 supplements for heart health. It does advise health professionals consider the use of omega-3 supplements for those with high triglyceride levels and as an additional treatment for heart failure.

And lastly, everyone should include two to three serves of fish per week in their diet.

High-dose, immune-boosting or four-strain? A guide to flu vaccines for older Australians.

Is it too late to start now? Is a little leaking okay? All is revealed.

A prescription drug to treat high blood pressure has shown promise against dementia.