Older Australians concerned by recent market volatility should reflect on the significant gains super funds have made since the start of the bull market in 2009.

Despite February delivering the first negative monthly return in more than 12 months, super funds have returned an average of 117 per cent since the global financial crisis (GFC) nine years ago.

While one month of negative returns may prompt many Australians to switch funds, SuperRatings CEO Kirby Rappell warns of the dangers in doing so.

“The lesson for superannuation members is that a focus on long-term performance is essential,” said Mr Rappell.

“While members may feel unnerved by recent volatility, it is impossible to ignore the significant gains that super funds have delivered since the start of the bull market in 2009.

“After nine years, you might say the global share market rally is getting a bit long in the tooth, but this is at odds with the economic data, which is pointing to a strengthening economy.

“Market corrections, while they can cause members to panic, are often a necessary check against bubbles. What the recent volatility tells us is that the market is capable of self-reflection, and that investors are focused on valuations as well as the broader economic picture.”

Aside from Mr Rappell’s concerns about switching super funds, there is still evidence that your choice of fund makes a massive difference to your bottom line. The difference between the best performing and worst performing funds since 2009 is significant.

According to SuperRatings’ return data for the 10 years to 31 January 2018, REST is the top performing fund among balanced option accumulation funds, returning an average of 7.0 per cent per year over 10 years. CareSuper comes in second, returning 6.9 per cent per year. All top 10 funds delivered in excess of CPI plus targets. 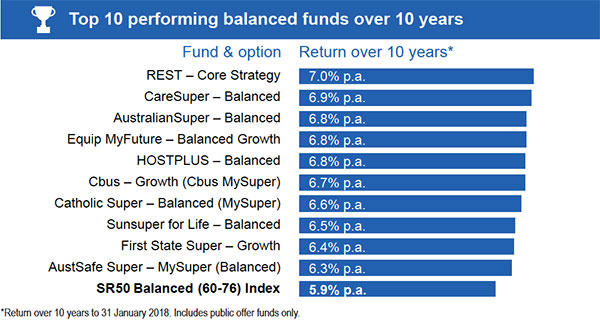 While CareSuper is the second-best balanced fund option, it takes out the top spot in growth funds, returning an average of 7.3 per cent a year over 10 years. Energy Super came in second, returning 7.3 per cent. 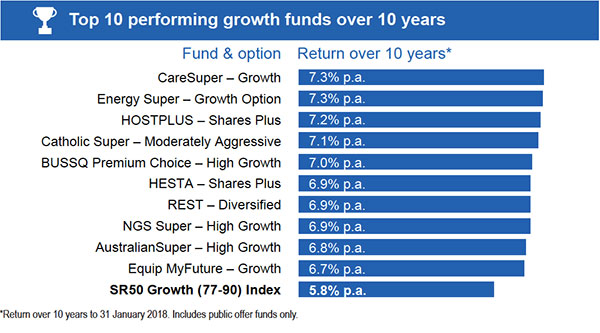 During the accumulation and pension phase, balanced funds may still be the most popular option, but growth option performance is becoming increasingly relevant, with member allocation to higher growth options increasing from 8.4 per cent to 13.6 per cent since 2008.

How has your super performed? Are you concerned about February’s downturn?