Coffs Harbour’s Big Banana has a lot to answer for. Not only it did it spawn all those other kitsch ‘attractions’ – witness the big prawn/pineapple/sheep/trout and, heaven help us, the big rum bottle – it skewed my view of Coffs Harbour for years.

I figured if a banana was the best that Coffs could offer, then I wasn’t biting. However, lured north by TigerAir’s new Melbourne-Coffs Harbour thrice-weekly connection, I resolved never again to judge a destination by a marketing tool created 50 years ago. A lot can happen in 50 years – it has to me – and Coffs, too.

The locals I meet are adamant there has always been more to Coffs than a man-made banana, even 50 years ago. Just look around you, they encourage. And they aren’t wrong – with endless pristine beaches, national parks  (11 in total, plus 37 state forests with a whopping 84,000 hectares world-heritage listed), a climate decreed the best in Oz by the CSIRO, city-standard cafes and restaurants, and activities aplenty for all ages and stages of life, there’s no denying Coffs has a lot to offer.

Yep, Coffs has all that the high-profile destinations possess – there’s even a marine park, the Dolphin Marine Magic theme park. Thankfully though, there are a couple of things it lacks, such as over-inflated prices, Byron, Noosa and Surfers Paradise I’m pointing the finger at you, and crowds. That’s what 44 kilometres of wide, white sandy beaches will do – you can always find a spot to spread out.

Wedged between the deep blue of the Solitary Islands Marine National Park and the lush green of the national parks, Coffs still has that old-fashioned, Aussie beach holiday feel. That is not to say that it’s devoid of development, but it is largely low-rise.

Coffs is a town for all seasons and for all the seasons of life. Its temperate climate and diverse charms see to that. The beaches are a good example: while the waves near the quirky, creative must-visit hamlet of Sawtell, 10 minutes south of Coffs, are only for experienced surfers, just around the headland, the shallows of Boambee Bay, fed by one the many creeks that flow from the Great Dividing Range, are a mecca for those looking to do little more than dip their toes.

Given the temperate climate, there is nothing much that doesn’t grow in the region, which means we’re talking local and fresh food in the numerous cafes, restaurants and pubs. And boy is it cheap – especially at the many farmers’ markets. I saw bananas for $1.10 a kg at the Thursday Growers Market in the City Square, and a dozen eggs for much the same price outside a house in the hinterland.

Ironically, the big banana plantations are a thing of the past as farmers have moved onto more lucrative crops such as blueberries, however, the big blueberry doesn’t have quite the same ring to it!

The harbour, as you’d expect from the number one supplier of snapper to Sydney, buzzes with trawlers and tinnies, with prawns another speciality. For a one-off holiday splurge you can try both at the city-smart Latitude 30 restaurant on the Marina or, if you’re looking for something that won’t chew up too much of your holiday budget, grab some fish’n’chips from shed next to the restaurant.

As I said, there’s always something to suit every budget and that applies to the coast’s iconic holiday stay, the Novotel Coffs Harbour Pacific Bay resort. Set on Charlesworth Bay, backdropped by the rainforest, the resort is spread across 40 hectares of lush grounds. Sounds grand, doesn’t it?  But it’s the kind of place that families return to year on year, lured by apartments with kitchens, laundries and an array of facilities – we’re talking tennis courts, three swimming pools, spa, restaurants, bars, gyms, hairdresser and a nine-hole golf course that offers the cheapest, as well as one of the most challenging rounds, on the coast.

And talking of Coffs’ icons, there’s even more to the Big Banana these days as it has been updated with water slides and rides and there’s even an ice-skating rink. Yep, Coffs sure does surprise.

P.S. Of course I took a selfie in front of the Big Banana. Witness the sorry evidence above.

The Pacific Bay Resort is participating in Accor Hotel’s summer deals special with children under 16 staying and breakfasting free. 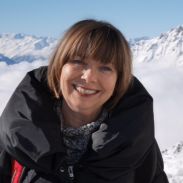