In case you had any doubt that social media can change the way in which the world works, here it is.

Have you heard of the man who made an album of miserable holiday photos? For those of you who missed this story, it’s about Kevin Blandford, a 34-year-old from Kentucky who won a free holiday to Puerto Rico. Sadly, he was unable to take his wife, Bonnie, and seven-month-old baby. So, as all good husbands, he made them a rather hilarious album full of snaps showing what a miserable time he was having.

Titled ‘Not a single second of fun in Puerto Rico’, the ‘miserable’ holiday album almost instantly went viral on Imgur, an image-sharing platform. Claiming he was “really glad it’s made some people laugh”, Kevin, we doubt, wasn’t expecting what happened next.

Once both the Puerto Rican tourism-advertising agency and the hotel at which Kevin stayed eventually saw the photos, Kevin received a second chance. But this time, to make sure he smiled in his snaps, he was able to bring his wife and eight-month-old baby to join him.

In what was undoubtedly a brilliant marketing move, the follow-up photos, labe’led ‘Many seconds of fun’, are actually quite heartwarming. 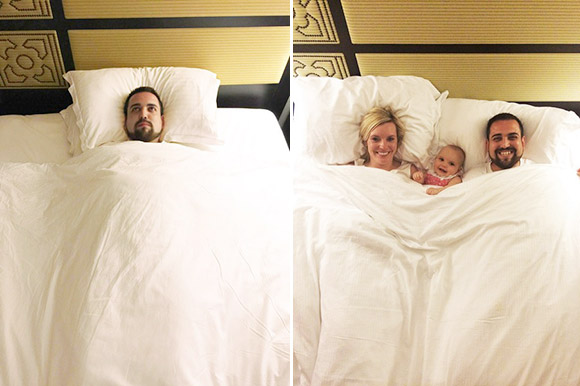 You can view all the images at Imgur.