France is the world’s most visited country. There were 84.5 million visitors to France in 2015, followed by the USA with 75 million, at nearly 9 million fewer tourists.

While it’s nearly impossible to avoid the selfie-snapping crowds, France is big enough to offer areas where tourists are relatively sparse.

And why not make a foray into a lesser-known France?

Dijon, the capital of Burgundy, is approximately two hours by TGV (high-speed train) from Paris. Its railway station is the second busiest outside Paris. Travellers pass through Dijon but don’t often stop, which is a pity, as it’s a lovely small city. 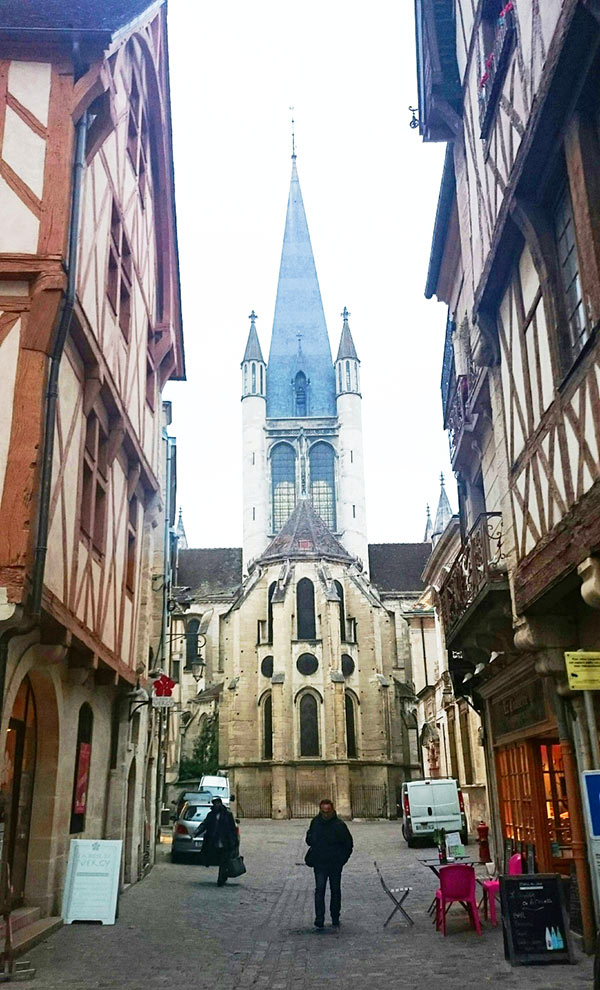 What they’re missing in Dijon is a medieval city packed with well-preserved historic buildings, Gothic churches, splendid shops, and a Ducal Palace that stands in the town centre as a reminder that Burgundy was once more powerful and wealthier than the kingdom of France.

Touted as a gastronomic capital, the 19th-century-old market in the city centre is where everyone still shops. Friday mornings are busiest.

Add a nip of Cassis to the local inexpensive white wine made from the grape variety, Aligoté, and you have a Kir, a drink named after a 19th century mayor who reportedly saved the town from an invading German army by stretching wine supplies through the clever addition of Cassis.

Mustard shops are abundant. My personal favourite is Edmond Fallot near the Old Market. Tastings are available in the shop. Made in the traditional style, this is authentic head clearing stuff.

Besançon is small enough for a day trip, allowing enough time to thoroughly explore Vauban’s magnificent Citadelle. Ignore the misplaced zoo (well-maintained but why a zoo was allowed within these walls is beyond my understanding) and focus on the fascinating small museum devoted to Vauban and his importance to French military history. The views from the battlements overlooking the old city and surrounding countryside are exquisite.

South of Dijon is France’s third largest city, Lyon. Mostly overlooked by travellers, it’s full of ‘bouchons’, Lyon’s unique family owned bistros, where no menus are offered, and food is what the cook prepared according to market availability and simple local wines (Beaujolais). You’ll find lots of local people gorging on traditional dishes. If you’re averse to offal, bad luck.

Lyon is spectacularly situated at the confluence of the Saône and Rhône rivers. The old city, named the Presqu’ile, is bounded by the two rivers, while its northern fringes rise above both waterways. This neighbourhood, called the Croix Rousse, is accessible from the Presqu’ile via the city subway, a combination cog railway, due to the steep incline, and a normal Paris-style Metro. Countless cafés, restaurants and shops fill Croix Rousse (once the centre of the city’s thriving silk weaving trade), almost zero tourists, just local people doing what the French do best when in relaxed mode: stroll, eat, drink and shop.

In the Presqu’ile centre is one of Europe’s largest public squares. Typically ‘belle epoque’ French in appearance, it’s a wonderful space. Check out the statue of Antoine de Saint-Exupéry in the southwest corner of the square. He was born a few blocks from this memorial. Shed a tear looking up at the little prince positioned behind the renowned author, a tiny hand resting on his creator’s shoulder. 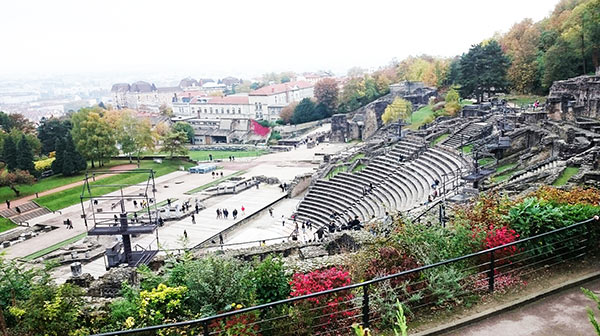 On the west bank of the Saône is Lyon’s ancient centre, perfect for strolling along narrow cobblestone streets. Near the gothic Saint Jean Cathedral is a funicular station with two routes to the plateaux above, one to the square next to the 19th century Basilica Notre Dame Fourvière, with its gardens descending back to the St Jean quarter of the old city, the other to a quiet neighbourhood closer to the Roman ruins. (Take the funicular railway up, and then walk down; it’s easier. This is the world’s oldest funicular railway.) Near the Fourvière church are extensive Roman ruins, including an amphitheatre overlooking the city. On a clear day, Mont Blanc can be spotted glowing white in the distance. Entry to the Roman ruins is free.

Back to Dijon: a two-hour TGV ride from Dijon via Mulhouse will bring you to Colmar, the prettiest city in Alsace. 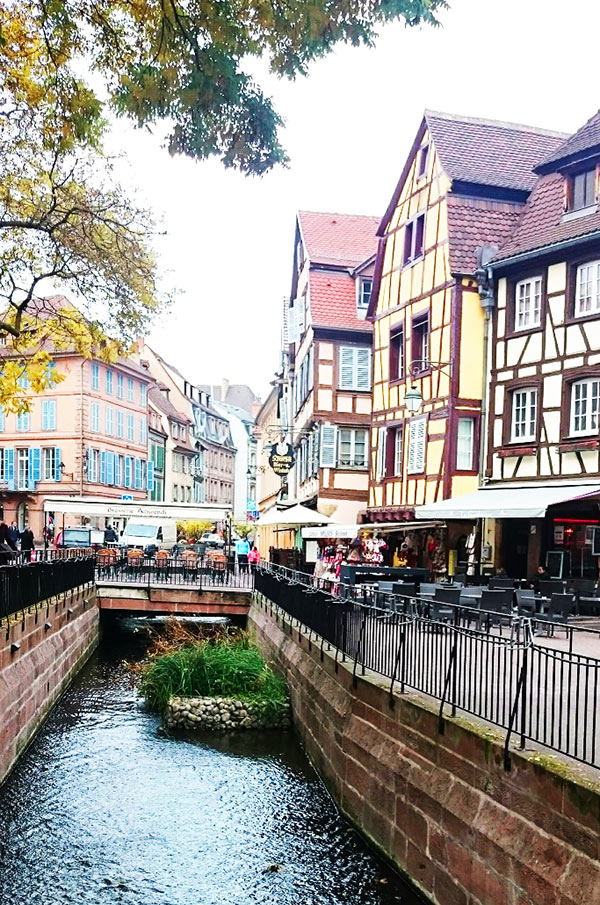 To say this small city is charming is understating the obvious.

Alsace is altogether different to Burgundy or Franche-Comté, changing ownership from Germany to France and back again before and after WWI.

French pride is most evident in the Hansi Museum. Known popularly as ‘Oncle Hansi’, Jean-Jacques Waltz was born 1873 in Colmar. He attained a beloved reputation for his cartoons and depictions of anti-German occupation sentiment, resulting in a year’s imprisonment in a German camp during WWI. He died in 1951, weakened by wounds inflicted during a Gestapo attack after fleeing Vichy France to Switzerland during WWII.

Hansi’s artwork, which included street signs, can be found throughout Colmar, tributes to the affection felt for this national hero who devoted his life to the French Alsatian cause for independence.

Also in Colmar is a small natural history museum, the Musée d’Histoire Naturelle, best known for its collection of Australian phasmids (stick insects) and complete skeletons of prehistoric animals found in the nearby Rhine River valley. As a source of municipal pride, it’s almost as popular as the Hansi Museum. 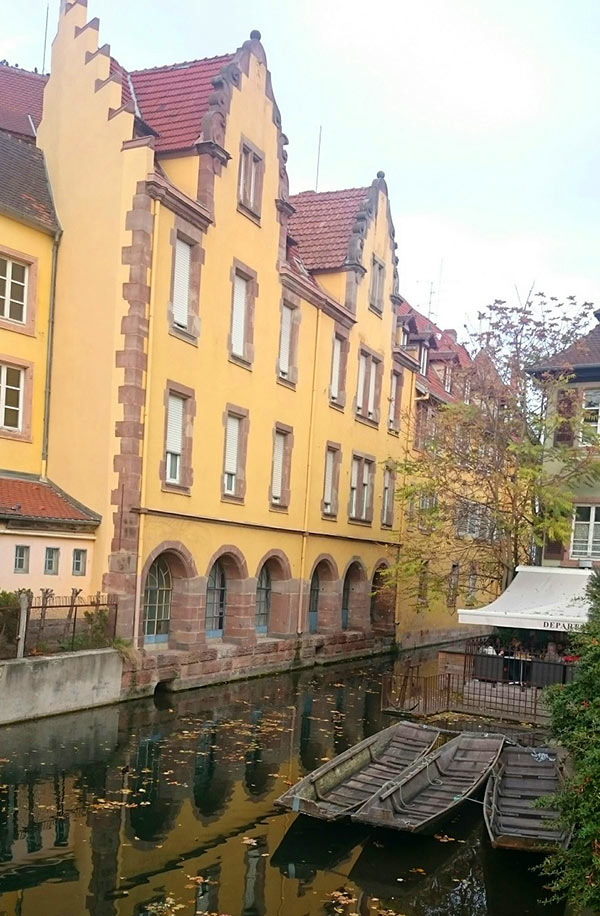 Of course, you could simply wander along Colmar’s quintessentially colourful streets looking for another cute restaurant serving choucroute garnie, a dish of sausages and sauerkraut, and lively Alsatian wines. Apart from a few tourists (mostly German), you won’t be overwhelmed by crowds.

Where to stay in France

In Dijon, the Hostellerie du Chapeau Rouge is well-appointed, perfectly situated (15 minutes on foot from the railway station) friendly, and best of all, has the excellent two Michelin starred restaurant, William Frachot, on its premises.

In Lyon, I loved the Fourvière Hotel near the Fourvière church and Roman ruins. A former convent, it served excellent breakfasts and dinners in its refectory dining room overlooking the private inner courtyard. Service is flawless and the quiet location in a private park overlooking the city below made it even more special. Each room is named after a famous Lyonnais resident.

Le Colombier Hotel in Colmar is next to the ‘Little Venice’ riverside neighbourhood, with all major attractions within a half hour walk. Rooms vary greatly in size. Some are too small for two people with bags. Ask for a large room. Super breakfasts, service and perfect location place it amongst the top hotels in town. The hotel’s rear entry leads to the Rue Turenne (Museum of Natural History and the old market). 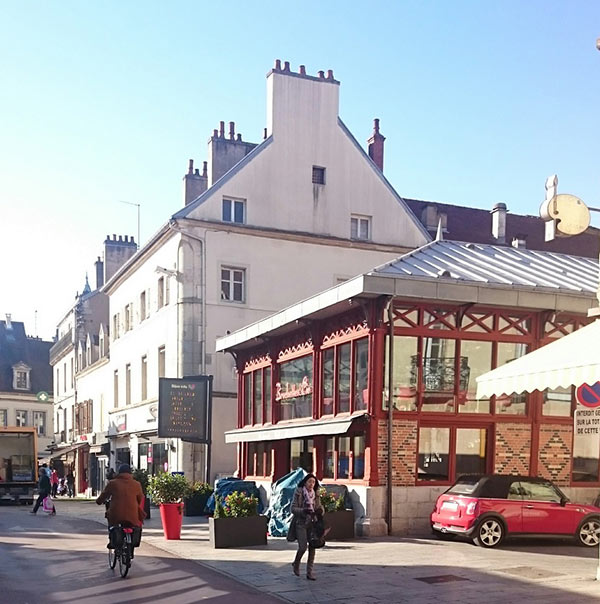 Where to eat and drink

Dijon
William Frachot is Dijon’s best restaurant. It’s also one of the best in all of France.

Also in Dijon is the exquisite le Pre Aux Clercs restaurant headed by chefs Jean Pierre (JP) and son Alexis Billoux in the Place de la Liberation square facing the grand Palais des Ducs. JP is a legend in Dijon, having been in the business for decades. He’s an absolutely charming man with an innate understanding of traditional Burgundian fare cooked with a light touch.

Near the Place de la Liberation through an archway outside le Pre Aux Clercs restaurant is the tiny bar Messire (3 Rue Jules Mercier). This is the kind of bar I want to visit daily. If you have a Kir anywhere in Dijon, drink it here first.

Lyon
This is where Paul Bocuse, the legendary chef, lives. Last year, he celebrated 51 years with 3 Michelin stars. If you want to know where ‘nouvelle cuisine’ began, eat at his l’Auberge du Pont de Collonges (also known simply as ‘Bocuse’), approximately 10 kilometres from Lyon centre.

Dining here is an event. It’s the Grande Bouffe. Service is incomparable. The wine list is encyclopaedic in scale with prices to match. Spend 10,000 Euro on a bottle or 9,950 Euro less; there’s something for every budget, all terrific. Monsieur Bocuse’s food isn’t as cutting edge as it once was. Rich begins to describe it. Bring an empty stomach, loads of cash and an open mind. The master turned 90 turned last year.

Lyon is famous for its ‘bouchons’, small family-owned and run bistros, serving Lyonnais cuisine with local wines. They’re institutions; some turn the tourist trade and aren’t worth their duck fat. But most are authentic delights run with care and precision, welcoming and terrific value for money. The best of the lot will be completely reserved at least a week in advance. In the old city’s Rue Saint-Paul, Rue Lainerie and Rue Juiverie, you’ll find numerous ‘bouchons’. Check the menus before booking.

Colmar
JY’S is Colmar’s best restaurant. Chef Jean Yves Schillinger is a local lad made good. His take on rich Alsatian food is one of light relief. Much as I like choucroute garnie, I can eat only one a year; it’s too rich for me. JY’S is where I could eat often and very well. The Alsatian wine list is a revelation. Opt for the matching degustation and wines. No regrets.