How old you are could be more important to some employers than your experience, or your capacity to do the job – particularly for older candidates. That was the conclusion of research my colleagues and I recently published on age discrimination. We tested 500 managers across nine European countries, using job applications of people aged between 43 and 63, and showed more suitable job candidates did not experience less discrimination.

Our findings are especially significant seeing as retirement ages are on the up. Since 2000 they have risen across Europe by an average of 2.5 years and in many countries are projected to increase even further.

The COVID-19 pandemic is primarily increasing unemployment among younger workers, but acquiring a new job can be easier for them than for older people, precisely because of this inequality in hiring practices. Ageism is also known to force older workers to accept unfavourable job conditions. And we know prolonged unemployment for older people is painful both financially and for their mental health.

Damaging stereotypes
One theory about age discrimination focuses on something known as ‘statistical discrimination’, which we looked at in our study. It is the idea that employers often lack the proper information to determine which candidate is best, and therefore they base their decisions on discriminatory stereotypes. Information refers, in this instance, to details about training, experience, motivation, performance, health, and retirement intentions, or what we called the six productivity indicators.

Interviews with managers suggest employers still fear that older workers are sick more often and that they are less motivated, healthy and productive. So, given the choice between an old and a young candidate with identical CVs, an employer affected by statistical discrimination would supposedly choose the younger candidate. Without enough information to differentiate between the two, they would resort to the stereotype of the older candidate being less productive and sick more often.

Our findings
Our findings did not support this. We asked employers to rate hypothetical job candidates who were randomly assigned different ages and hiring information. The older a candidate was, the less likely they were to be hired, which we took as evidence of discrimination.

Importantly, the information provided about an older candidate did not affect whether they were discriminated against. Managers did consider the six productivity indicators. But being a good candidate did not reduce the influence of the candidate’s age. 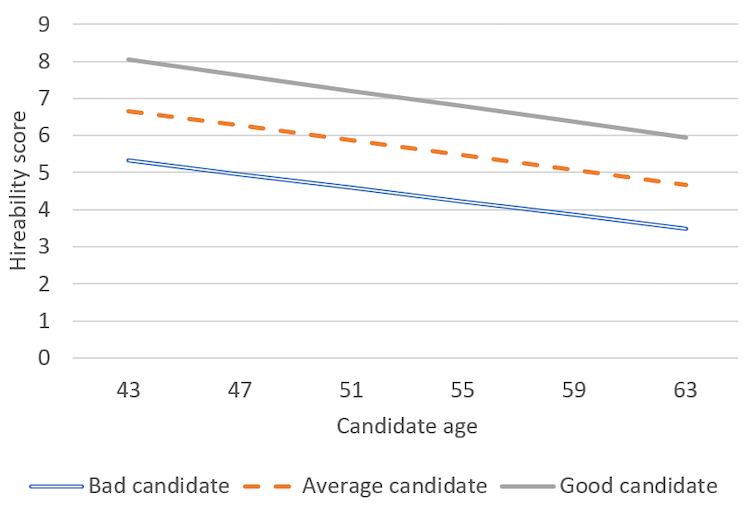 Countries differed too. In eastern European countries, such as Bulgaria and Hungary, employers discriminated three times as much as in Sweden and the UK, where ageism was weakest. This could be explained by the high Swedish retirement age, which reduces the fear of early retirement and makes older workers more ‘normal’. In the UK, the fact that it is easier to dismiss workers than in most European countries might reduce the fear of accidentally hiring a bad candidate.

Tackling discrimination
A number of measures could be considered to combat age discrimination that are in line with our research and previous studies. Most obviously, the hiring process needs to be improved.

After our experiment, we asked the managers who took part what they thought the study was about. Respondents who correctly assumed our study was about age discrimination (about one-third) discriminated less strongly than those who assumed it had a different purpose. This means that there is a social factor in the process of hiring: people behave differently when they fear being seen by others as discriminatory. So increased transparency of the hiring process may be one of the solutions.

Hiring committees should also be more diverse. We found that older managers discriminate less than younger managers. Diversity concerns more than just age, but it should be part of the consideration.

In 2016, the business social media network LinkedIn removed people’s ages from their profiles. This was the right thing to do. Our research has demonstrated that no matter the quality of a candidate or their suitability for a job, age is a factor in employers’ decisions. As unemployment rises, it is more vital than ever to make the hiring process as fair as possible. Age is but a number, after all.

Does ageism in the workplace simply not add up for you? In your experience, do older workers take more sick leave than younger employees?