Losing a partner is one of the most painful experiences a person can go through, and can make you feel as if you have lost yourself too.

They may have been someone you shared a huge portion of your life with, built a home, had children with – or you may have had hopes and dreams together for a future, which you now face without them.

Grieving takes time and is different for everyone. We spoke to two widows and a widower about what helped them after their loss.

Daphne Berkovi, 75, lost her husband Jack last May through cancer. As his carer for a number of years, she says a huge void was left in her life.

“We’d been married for 50 years. We got married after he finished university where he studied mechanical engineering. He had a wonderful career.

“He was just a lovely person. I miss him because he was not only a sweetheart, he was a very interesting person. He was lovely company. I just feel the urge to turn around and talk to him. But he’s not there.”

Read: Sir Tom Jones on getting through grief

Dealing with her loss has felt impossible at times, but she has found some solace in openness, companionship and poetry. She says those struggling with losing their partner should seek sincere companionship.

“Happiness is not being socially isolated and feeling embraced by people that are genuine, and accept me for what I am. You need good people around you. I’ve got my daughter and my grandchildren.

Ms Berkovi spends many evenings crocheting and has been giving out some of her crochet blankets at local food banks.

Another creative outlet has been writing poetry. “There are times when I can’t write, but other times when I feel particularly angry or upset the words seem to flow,” she says.

2. Give back to the community and remember you are still here

Brenda Pugh, 77, is a coordinator for a widow’s group. She lost her husband Robin in 2014. They had a long and happy marriage despite meeting and marrying after only six weeks in 1964.

Read: The five stages of grief

Ms Pugh’s husband died of a rare tumour just below his stomach. By the time it was found, it was terminal and he died within six months.

“He had never complained, he didn’t seem poorly, and he was admitted the same day he went to the doctor. I started grieving that day.”

After he died, the realisation really hit. “Suddenly there is no one there, you are on your own. I am very independent, but suddenly I didn’t have my partner by my side.”

To fill her time, Ms Pugh took up volunteer work. “I worked in charity shops, and then found out about the Jolly Dollies. It has helped immensely to fill the time. Meeting other people in the same position is really helpful.”

Being a part of the community has given her lots to do. “I also volunteer for our GP surgery’s caring service which has lunch clubs and coffee mornings, and I go on Thursdays with a cake and serve coffee to local OAPs.”

Giving back has helped her come to terms with her grief and move forward in life.

“You just have to do something and live,” she shares candidly.

And when that grief washes over you again, “Don’t think, ‘What if?’,” she says. “You couldn’t have changed anything.”

She also advises: “Don’t make too many big decisions within the first year, but make the most of the time you have got. You don’t have to stop living.

“There is no reason for any widow to be lonely nowadays, there are so many organisations out there for you to meet new people. You may live alone but you don’t need to be lonely.”

3. Take grief one day at a time

Abel Keogh, 47, lost his wife Krista to suicide when she was 25, and seven months pregnant.

He found himself widowed in his 20s, and says: “I was numb for weeks after Krista’s suicide. I spent most of my time at the hospital with our premature daughter. It wasn’t until after my daughter passed away that the reality hit. There was a lot of grief, sorrow, pain but mostly guilt.

“I was 26 when she passed, and no one in my circle of family and friends was widowed. I sensed that most people didn’t know what to say or how to react when they were with me.”

Read: What stage of grief are you in?

He says he “found solace in regular exercise and writing”, and has gone on to write several books about grief and being a widower. Now he coaches others through their experiences.

Slowing down the process helped, Mr Keogh says. “Take things one day at a time while you figure out the next chapter of your life. Though you may have friends and family cheering you on, ultimately grief is a journey you have to walk alone.”

And eventually, he met someone new. “People mistakenly believe that new love will heal a broken heart,” he says. “Before I could fully open my heart to Julianna, I had to forgive Krista, and forgive myself.

“These 19 years with Julianna have been the best years of my life. My loss has taught me to treasure each moment with my wife and children.” 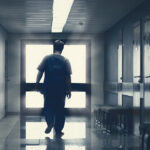 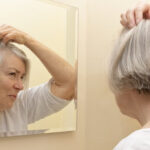