Australia has weathered the coronavirus pandemic better than many other countries, recording just over 7500 cases and 100 deaths so far. But various errors, such as the Ruby Princess debacle, show we can – and must – do better.

The crisis has reignited a long-running debate about the need for an Australian Centre for Disease Control and Prevention (AusCDC).

Opposition leader Anthony Albanese advocated for one this week, as did Australian Medical Association President Tony Bartone. It is likely these calls will grow louder as the pandemic progresses, especially if we see a second wave in Australia.

Support has been building for decades
The proposal for an AusCDC has been debated for at least the past 33 years.

In 2012, a parliamentary committee on trans-border health threats received submission after submission supporting the creation of an AusCDC, prompting the committee to recommend commissioning an independent review into the feasibility of its creation.

However, after a limited consultation and six-year delay, the federal government responded by saying a centralised agency to coordinate health emergency responses was not needed.

The need for a coordinated and improved response to health emergencies across Australia’s multiple jurisdictions has been flagged many times during COVID-19. So, what’s stopping us?

Politics getting in the way
The short answer is politics. While the public health community has long supported the creation of an AusCDC, it has repeatedly fallen foul of state and federal politics.

NSW and Victoria have consistently held any CDC should be based in their respective states, while others have argued for Canberra.

State governments have also resisted calls for a national CDC on the basis it might ‘steal’ their top public health experts.

The federal Department of Health, meanwhile, has reportedly flagged its discomfort with an independent, arm’s length entity.

The case for an AusCDC
Australia’s pandemic preparedness efforts throughout the early 2000s established a solid foundation for the national COVID-19 response, but successive governments dropped the ball.

Multiple recommendations to continue strengthening our preparedness efforts were ignored. Our national influenza vaccine manufacturing capacity that once guaranteed Australians priority access has been privatised.

And our national medical stockpile of personal protective equipment appears to have been subjected to budget cuts and efficiency savings to the point where there was insufficient stock when the pandemic struck.

While our politicians will no doubt point to the National Cabinet as evidence Australia managed the crisis well, its creation was a stop-gap measure invented in the middle of a crisis that ignored Australia’s existing pandemic governance arrangements.

Admittedly, an AusCDC would not fix all of these problems. But there is a reason why countries like China and Nigeria, as well as entities like the European Union, have followed the US lead in creating one.

In fact, Australia is the only OECD country without such a centralised disease control agency.

Basing a new AusCDC in the north
Building an AusCDC is only one small part of the equation. Our region is one of the most disaster-prone areas of the world. Added to that, it comprises nearly two-thirds of the world’s population, many of whom live in high-density urban environments where diseases can spread easily.

When the next crisis emerges – and it will – Australia will have an important role to play.

For these reasons, it makes little sense to locate the new AusCDC in Canberra or Sydney. It needs to be as close to Asia as possible – in Darwin.

Australia’s civil-military medical assistance teams (AusMAT) are already based there to respond rapidly to regional disasters.

Locating a new AusCDC in Darwin would address one of the Coalition’s long-standing priorities of developing Australia’s north, guaranteeing the creation of new jobs and infrastructure.

If built on the AusMAT foundations, it would complement the Australian Defence Force’s efforts to help regional neighbours to meet common threats, such as malaria, dengue, even Zika.

This would provide new opportunities for civil and military cooperation in health, and counter China’s growing influence through its military medical diplomacy activities across the region. 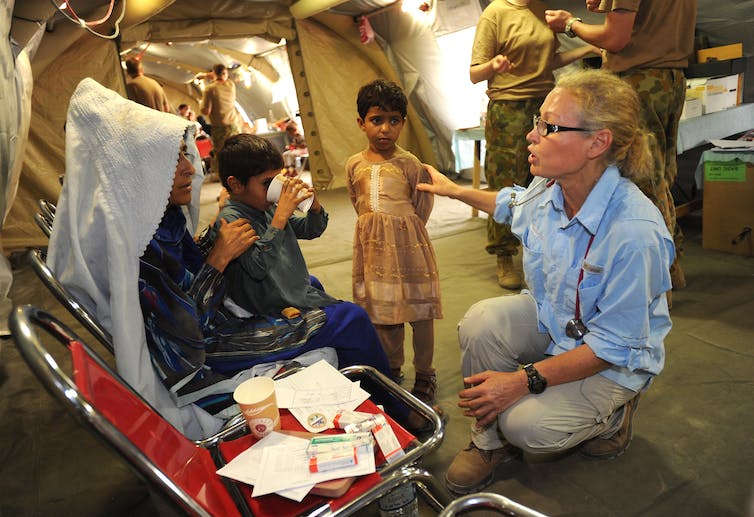 We could be doing more
An AusCDC would allow us to add another component – a new Australian Public Health Corps (AHPC), a uniformed service of epidemiologists, nurses, pharmacists, physicians and even engineers that could be deployed at a moment’s notice to respond to disasters or health emergencies.

This workforce would be based on the US Public Health Service Commissioned Corps (USPHSCC), which has responded to disasters such as Ebola outbreaks in Africa, Hurricane Katrina in Louisiana and the 2010 earthquake in Haiti. It also provides healthcare services to Native Americans living on remote reservations.

This would not only aid our Closing the Gap efforts, but also provide Indigenous healthcare workers with new employment opportunities similar to the Indigenous Rangers program that has proven so successful.

We must look to the future and ensure we are better prepared for the next pandemic or regional health emergency. The time for the creation of an Australian Centre for Disease Control is well past due.

Do you think Australia should have a Centre for Disease Control?