Health Check: how to tell the difference between hayfever and the common cold 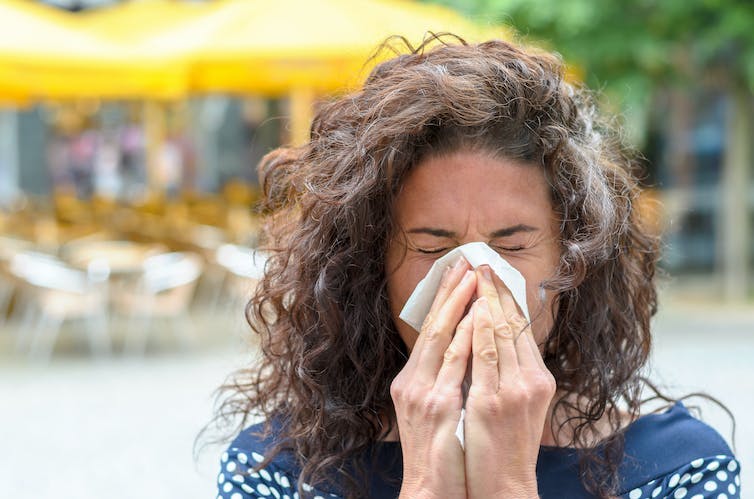 You wake up with a runny nose and, come to think of it, you’ve been sneezing more than usual. It feels like the start of a cold but it’s nearly October – the start of hayfever season – so what is the more likely affiliation?

Hayfever and colds are easy to confuse because they share the clinical category of rhinitis, which means irritation and inflammation of the nasal cavity.

The mechanisms share some similarities too, but there are some key differences in symptoms – notably, itchiness and the colour of your mucus.

Read more: Health Check: what is the common cold and how do we get it?

The common cold is a viral infection of the upper respiratory tract, usually caused by rhinoviruses. Colds spread easily from one person to the other via coughing, sneezing and touching infected surfaces.

Hayfever, on the other hand, can’t spread from person to person. It’s an allergic response to an environmental irritant such as pollen or dust.

The nasal cavity contains cells that recognise foreign substances such as bugs and pollen. Once the body detects a bug or irritant, it activates an army of T cells that hunt down and destroy the substance. This is known as an immune response.

In hayfever, the irritant triggers the same immune cells as viruses. But it also causes the release of IgE antibodies and histamines to produce an ongoing blocked nose, impaired sense of smell and nasal inflammation.

Sign up to Thrive, a weekly dose of evidence to help you live well.

How you tell the difference

Both hayfever and the common cold cause sneezing, runny or stuffy nose and coughing.

One of the key differences is the colour of the nasal discharge: it’s more likely to be yellowish/green in colour in colds; while in hayfever, it’s clear.

Facial itchiness – especially around the eyes or throat – is a symptom typically only seen with hayfever.

If someone is allergic to a seasonal environmental trigger such as pollen, their symptoms may be restricted to particular seasons of the year. But if you’re allergic to dust or smoke, symptoms may last all year long.

Hayfever, like asthma, is an allergic disease and can sometimes cause similar symptoms, such as coughing, wheezing and shortness of breath.

A sore throat, on the other hand, is generally the precursor to a cold. If you have cold-like symptoms and a sore throat or have had one in the past few days, your condition is more likely to be the common cold. 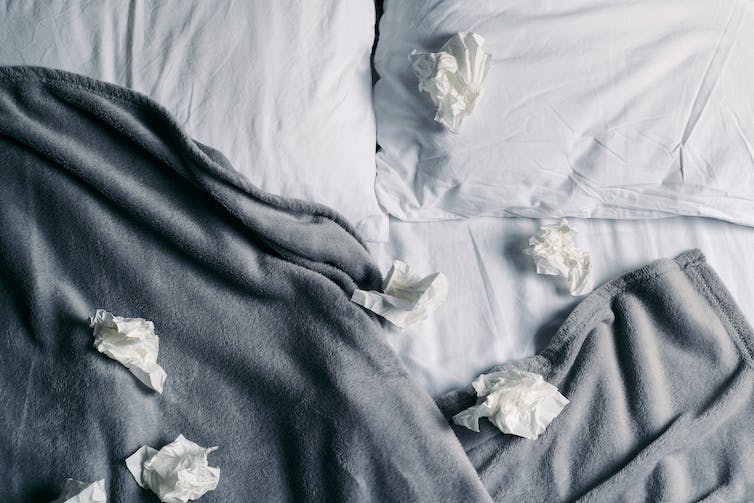 If your throat is sore, it’s probably the start of a cold. nito/Shutterstock

What if you’ve never had hayfever before?

You’re more likely to catch viral infections during winter when more bugs are circulating, but it’s possible to catch a cold any time of the year.

It’s possible to develop hayfever in adulthood. This may be due to a genetic predisposition that manifests only when certain other contributing factors are present, such as a high level of airborne pollen. Or it may be due to a major change in lifestyle, such as a move to a different location or change in diet.

Most adults will get two to three colds a year, while hayfever affects nearly one in five Australians.

Around 10 to 20 per cent of hayfever sufferers grow out of hayfever at some point in their lives and about half find their symptoms get less severe as they get older, which means that for the majority of sufferers, hayfever can last a long time.

How are they treated?

An allergy test, using a skin prick or blood test, for allergen-specific IgE could inform you of the specific irritants that trigger your condition. These tests can be organised through your GP or pharmacist.

Read more: Health Check: what are the options for treating hayfever?

Oral antihistamines are effective in hayfever patients with mild to moderate disease, particularly in those whose main symptoms are palatal itch, sneezing, rhinorrhoea, or eye symptoms hayfever treatments.

Generally, treatment isn’t necessary for a cold but over-the-counter medications such as paracetamol and ibuprofen can help relieve some of the symptoms. Do you suffer from hayfever? Has the severity eased as you’ve aged? Do you have any ‘magic’ tricks to relieve the symptoms?

If you enjoy our content, don’t keep it to yourself. Share our free eNews with your friends and encourage them to sign up. Related articles: Choosing a companion dog Remarkable cat stories Avoid these bathroom reno rip-offs