Not merely costume: the power and seduction of the Queen’s hats

I have been a lover of the Queen’s hats for some time. An absolutely exhaustive source of information is the amazing blog Royal Hats. The Instagram account of the Royal Collection Trust is another exciting archive, which frequently documents royal hats in video form, spinning in an undefined space so that you can see all their sides and in immense detail. Not since Leigh Bowery has an “Australian” performance artist owed so much to their costumiers, milliners, vendeuses and dressers.

From Australia’s own Frederick Fox (who created over 350 hats for the Queen), to the wonderful Simone Mirman and the more recent genius Philip Treacy, the Queen has at her disposal some of the best creative milliners in the world. This suggests an interest in the potential of hats and clothes to tell stories in a way that is beyond fashion or costume, almost like an artist or the way a rock star invents a persona for the stage.

As anyone who has ever watched reality TV show Project Runway can attest, when a judge exclaims, “This is merely costume!” it is one of the worst responses a contestant can receive. The Queen has walked that perilous line for decades to great effect.

To view the terracotta warriors in China she wore an eighties version of a Han dynasty hat, to meet a group of Girl Guides she wore an oversized beret, in Slovakia she wore a cross between a pill box hat and a bedazzled ushanka. Although “right” for the occasion, this also has to be a kind of joke, a piece of humour to set people at ease with wit and generosity.

My favourite in this vein is the hat the Queen wore for Prince Charles’ investiture in 1969. Designed by Simone Mirman, and based on a bonnet worn by Tudor princesses, the hat suited the medieval castle that was backdrop to the event. At the same time, it did not draw focus from Charles’ crown, which he was receiving for the first time.

It is important to see the Queen’s clothes as doing more than just signifying a place or occasion. In a Vanity Fair article Helen Mirren admitted that when she first saw her costumes for the 2006 film The Queen, she almost started crying. The clothes were so dowdy and plain. The first conclusion she came to was,

The Queen is completely uninterested in clothes … She’s not at all vain … It’s like a policeman wearing a uniform. She’s wearing her uniform. She doesn’t care what she looks like in it as long as it’s the right thing for the right moment. 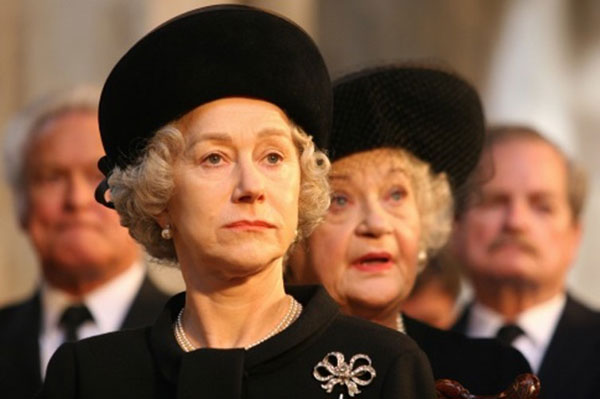 The Queen herself seems to concur. When Philip Treacy asked her, in a lapse of courtly etiquette (one is not supposed to address the Queen directly), “Do you like hats?” the Queen replied drolly, “It is part of the uniform.” The Queen at the races last year. Reuters staff

But of course I don’t believe her. Or this is at least not what you would normally call a uniform. There is always something more in it than mere instrumental reason. The Queen understands all too well that she must not only represent and embody the authority of her position, but she must also seduce the crowd, make them desire her or be awestruck by her. That’s where the artfulness comes in.

When Mirren finally put on her costumes she had an epiphany. The film producers had engaged the Queen’s makers and costumiers to create the clothes, and they were not like any clothes Mirren had worn before. Weighted with lead in the hem, made from the softest mohair, shoes perfectly fitted in fine kid leather: the apparent banality the Queen goes for is actually a lesson in excess. Princess Beatrice’s hat designed by Philip Treacy caused a stir at Prince William and Kate Middleton’s wedding – but that, of course, was the point. REUTERS/Toby Melville

And it is a particularly British form of aristocratic excess, in which you work hard, as a princely virtue, not to stand out except to those that know. A similar approach has been used for Jude Law’s costumes in The Young Pope. They are a little lighter silk, a little closer fitting, to allow him to exude his brand of restrained sexiness.

The hat is the example par excellence of aristocratic excess, and a particularly British courtly game. It is the style of that class to wear something quite banal but “top it off” with an extravagant hat. This was exactly the move Princess Beatrice made at the most recent Royal Wedding between Prince William and Kate Middleton in 2011. Her Valentino dress and day coat, which by my estimate would have cost around $350,000, tricked the crowd with its lack of obvious luxury. That the internet went wild about Philip Treacy’s hat as always amazed me; of course the hat was outlandish. That is the game.

The two sides of the Queen

Michael Carter, an Australian theorist of fashion and style, has always ighlighted the “untimeliness” of the hat, which does not neatly fit into fashion trends. It is always somehow out of style, always more ornamental, even when fashion dictates the minimal. For Carter, the hat proves that clothes are more than a sign of a particular subculture or being right for an occasion. Like a peacock with its feathers or a lyrebird with its song, apparel is a way to draw people in, to fascinate them.


Through her collaboration with many great makers, the Queen uses the whole gamut of the hat’s aesthetic possibility. Sometimes the hat is outlandish and sculptural, sometimes it is elegant and refined. The hat often repeats something else within the ensemble: the shape and colour of a sapphire brooch; the floral pattern of a dress made three dimensional on a band; a detail picked up from a cuff repeated in beading. The aesthetic appeal of a hat is of course endless.

But the thing that characterises the Queen’s approach is that it is equivocal. Since the 1950s many of the Queen’s hats have played on the border between military or academic uniform and fashion: the beret, the kepi and other military styles. In 2015 the Queen laid a wreath at Bergen-Belsen, the site of a concentration camp, in an outfit that was a brilliant evocation of the contemporary mood. It was decorously grey, befitting the sombre tone of a commemoration of something so horrid. Yet her hat oscillates between fashion and high seriousness: the sting of the provocatively military style was undercut by the fast white line reminiscent of 1930s hats in the same way the polka dots on her coat undercut the seriousness of the grey felt.

But the Queen’s greatest invention, which seems to date from around 2001, is a large top hat, which may also be drawn in part from the mind of Angela Kelly (her main dresser). This hat sits halfway between a sun hat and the hat the Mad Hatter wears. Angela Kelly designed the version of this hat that the Queen wore to the 2011 Royal Wedding: crepe with handmade silk roses and matching apricot-coloured leaves. This type of hat allows for a huge surface of colour while the small brim allows her face to be seen for photographs.

I have no doubt today, on her wholly symbolic Australian birthday, she will wear a similar hat. It is the perfect balance between meeting expectations of feminine formality and a quiet insistence on her sovereign authority, beyond gender norms.

The television show The Crown did a very good job, through a quite convincing melodrama, to bring to popular culture the medieval idea that the Queen has two bodies, one symbolic, one natural. Indeed on the opening of Parliament, the Queen still comes in two carriages, one for her body the other for the crown. The two sides of the Queen meet on her head.

We are brought to the power of the law and the state as much by constitutions and elections as by royal hats and royal weddings. Queen Elizabeth II’s seduction of her subjects has been as mannered as any Renaissance Prince. Machiavelli needed to add a chapter on Princesses’ hats.