A chorus of nightingales welcomed us to the Canal du Midi, a symphony of rich notes that signalled the start of a glorious holiday in the stillness of the French countryside.

The chirrups and whistles stayed with luxury hotel barge Clair de Lune as she meandered along the ribbon of green waterway, from Carcassone to Narbonne, in south-west France. 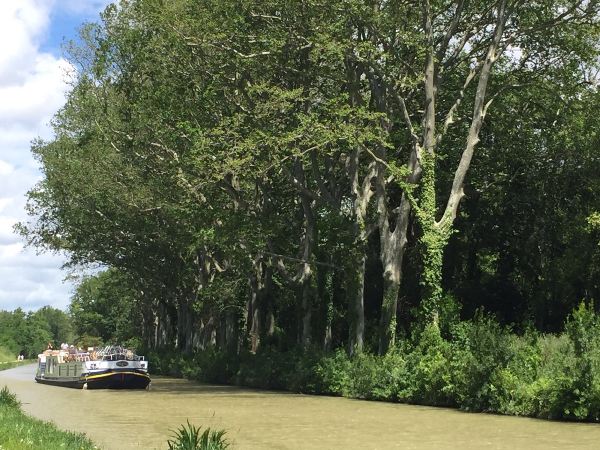 We moored at quiet spots on the canal, took walks or bike rides along the towpaths and gentle tours to castles, villages and wineries.

The pace was slow and rightly so, as the UNESCO-listed canal, a major feat of engineering which opened in 1671, should be savoured. Lazing on cushioned loungers and waving to passing boats was about as busy as it got when we were on the water, threading our way through miles of vineyards between the Corbières hills and Black Mountains of the Languedoc.

Even better, we did not have to navigate the 100ft barge along the canal’s contours and through two or three locks every day. That was the job of English captain Julian Allsop, who gave up life in London many years ago to live the good life in France. 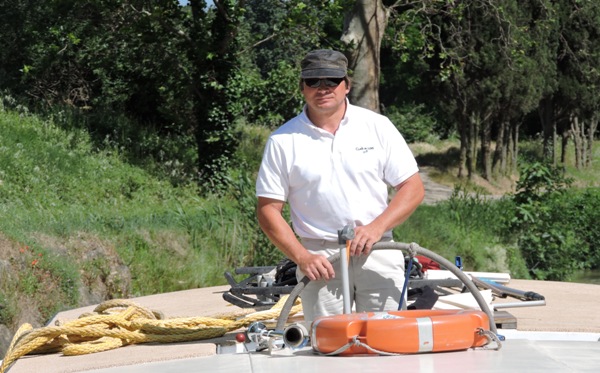 He was also captain of the wines which he paired at lunch and dinner, accompanied by an authoritative and entertaining commentary. By the end of the cruise we could all regale a lively line or two on the wine regions of Corbières and Minervois; the colour, the grapes and characteristics. We were quite the experts. Digestifs were also a treat, from green Chartreuse to Armagnac – all to help the meal go down, of course.

Our French chef, Loeticia, spent every day creating a fiesta of flavoursome food. The daughter of a chef who had worked in Brazil and Egypt, Loeticia’s menus were traditionally French with twist. There was nothing heavy, but she introduced us to a series of new flavours and combinations. Every dish was presented as if it was to be judged on a TV show and we were swept along by her expertise, enthusiasm and charm. 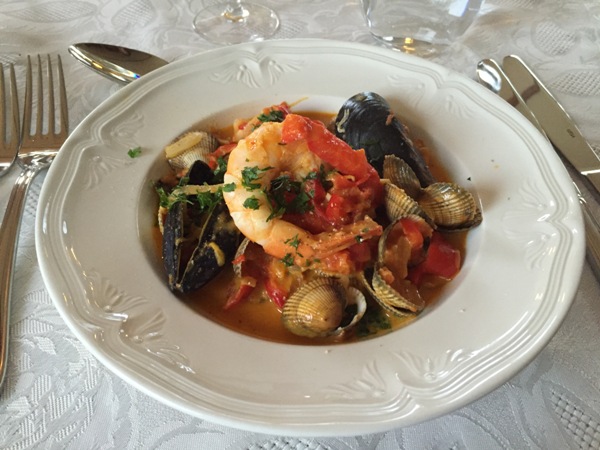 Loeticia had led humanitarian aid programs across the world during her ‘before children’ career and was kindness itself –  any leftovers would go to grateful lock keepers along the route. The mother-of-two lived and breathed her joy of food, and her sister, who works for Michelin-star chef Alain Ducasse in Paris, would have been proud of the exceptional menus she created with such loving care in a not-so-large kitchen.

Loeticia would buy fresh ingredients from the market and every mealtime explain what was coming with an exuberance that became contagious – her presence on the barge almost outshone the nightingales. 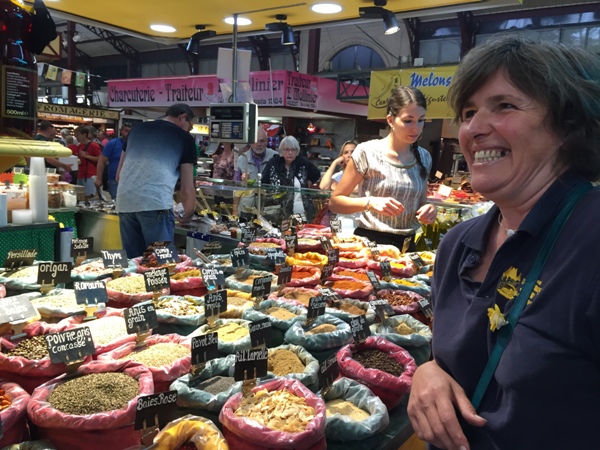 Every night we arrived earlier and earlier for dinner to eat melt-in-the-mouth, slow-cooked beef in red wine, langoustine bisque, confit of duck with leeks, and lamb with herbs and garlic cream – to name a few. Nothing was too much trouble. Loeticia would encourage guests to try new foods and without too much fuss, oysters and other classic French fare went down a treat.

Again, in French style, cheeses always came before, not instead of, dessert. Julian’s Dutch partner Nicole was the cheese master, introducing treats such as Mimolette, Morbier, Valencay and St Nectar to the dining delights.

Even after cheese, desserts were always a triumph. Loeticia’s Lindt chocolate and Bailey’s ganache, which also included a serious amount of cream and coffee, topped by roasted hazelnuts, was the most popular recipe to be taken home by guests to South Africa, North Carolina and the UK.

On the six-guest barge travelling with two other couples, learning about French history, culture and cuisine made for an unexpected highlight of this holiday. Clair de Lune was large enough for everyone to have their own space. Thanks to easy conversation and shared interests, we would often go on walks together, or in twos and threes, to explore or sit out on deck to share stories of home and away.

Clair de Lune was much-admired along our route. Her smart, navy blue hull with white paintwork, mirror-finish woodwork and brass fittings made her the belle of the canal.

The barge features three cabins, all around the same size, and each with a tiled shower and L’Occitane bathroom amenities to befit the region, comfortable beds and white linen plus more than adequate wardrobe space. The salon (a dining room-cum-lounge) was light with picture windows and homely with fresh flowers and plenty of books featuring the canal, wildlife, history and arts.

Cabins were cleaned each day, with beds turned down every night, and the whole barge, from dining room to sun deck, was pristine. The dining table was decorated in a different style every night, such was the attention to detail.

Entertainment came in the shape of half-day tours, bike rides along the towpaths or watching Julian negotiate double locks and dodge hire boats with L-plates, while we drank wine on the deck or lazed in the hot tub. 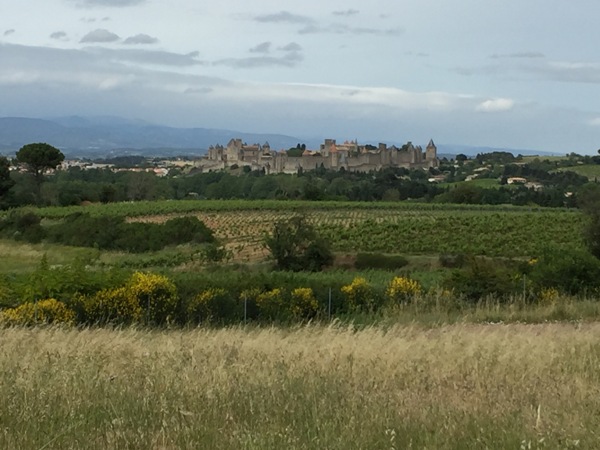 A tour to the magnificent medieval fortified city of Carcassonne revealed the importance of the region. Then in Lagrasse, an unspoilt town, we found a rural idyll where kingfishers darted along the river and colourful dragonflies vied for our attention.

Wine-tasting was not restricted to lunch and dinner; tours included visits to vineyards chosen for their quality produce and, occasionally, for the joy of French eccentricity.

Chateau Villemagne, on the outskirts of Lagrasse, produces 15,000 bottles of wine a year and has been in the same family for six generations. The present owner, Roger Carbonneau, who speaks the regional dialect Occitan, does everything from planting the vines to picking the grapes. His daughter, Sophie, was sticking labels on bottles and packing them during our visit to the 12th century wine cellar. The building was crammed with historic artefacts the family had unearthed over the years, from flint arrowheads and bones to coins. We sailed on to the pretty village of La Somail, home to a bookshop that deserves at least a half-day visit. (It has an English-language section and I regret not buying a second-hand I Spy book!) Cross the bridge to the shop and look for a plaque dedicated to Thomas Jefferson, who visited the Canal du Midi before he became President of the United States (see story below).

The village of Minerve, surrounded by two deep gorges, was a Cathar bastion destroyed by Simon de Montfort and his 7000 crusaders in 1210. These days it is quiet, with no more than 100 inhabiting the dramatic setting, and just a couple of interesting shops and cafes.

We took advantage of Nicole’s local knowledge to explore Minerve’s museum, with its rich collection of archaeological finds. There were cabinets full of dinosaur bones and eggs, through to objects from Roman and medieval times. An absolute gem.

Nowhere was the region’s strong links to the Mediterranean and Atlantic more poignant than in the former Roman capital of Narbonne. Here Caesar gave out parcels of land after the fall of Rome. The city was at the Roman crossroads connecting Italy and Spain, and part of the road is still visible. Opposite the cathedral, it is open for visitors to walk on and see the wear and tear from cart wheels.

In the late 19th century, Narbonne became wine-rich and around the city were many examples of wonderful architecture from the period. At the same time, the train station was established and visitors to the region can enjoy excellent links to Barcelona, Paris and Bordeaux.

Les Halles de Narbonne, a grand, covered market established in 1900 ‘is the place to shop’ Loeticia and Nicole told us. They were right and the place was buzzing with activity. Stalls have been passed from generation to generation and the fine quality of goods meant nobody in the region would ever need to use a supermarket for fresh produce.

With Loeticia leading the way, we tried olives, oysters, cheese (and more cheese), macarons, cherries and apricots. We were also intrigued to see customers buying steak from the butcher then flinging the meat over to a chef in the café opposite.

When the steak was ready, the chef’s sidekick used a loudspeaker to let the customer know lunch was served, with wine, of course. 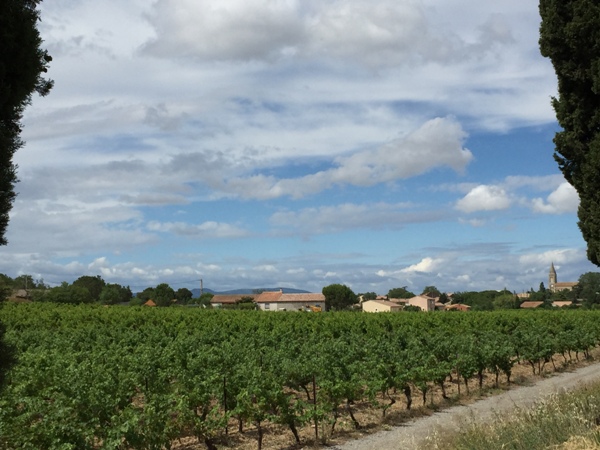 Jefferson’s declaration of delight
The Canal du Midi was built by Pierre-Paul Riquet, who worked out how to collect water from the Black Mountains to supply the canal. Work started in October 1667 and the canal opened 14 years later in 1681, linking the Mediterranean to the Atlantic Ocean.

Riquet died just before the 17th century’s biggest construction project was completed. But his name lives on in almost every village along the canal, with roads and buildings named after him. The importance of his work is officially recognised as a UNESCO World Heritage Site.

One of America’s Founding Fathers, Thomas Jefferson, author of the Declaration of Independence and the Statute of Virginia for Religious Freedoms, was the US Minister to France before he went on to become President.

While in France he studied culture, sending home to books, seeds and plants, wines, statues and architectural drawings – including a study of how water was supplied to the Canal du Midi.

He wrote of the canal: “Of all the methods of travelling I have ever tried, this is the pleasantest. I walk the greater part of the way along the banks of the canal, level, and lined with a double row of trees which furnish shade. When fatigued, I take seat in my carriage where, as much at ease as if in my study, I read, write, or observe.” 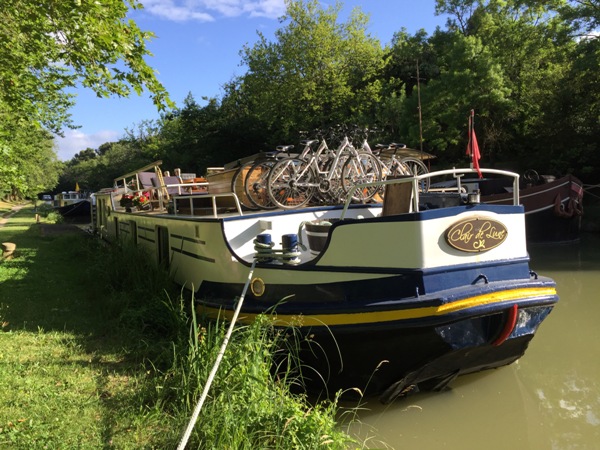 Catastrophe – but light at end of tunnel
The famous avenue of plane trees that once shaded the Canal du Midi, as mentioned by Thomas Jefferson, have been destroyed by fungus.

It’s shocking to see the tree stumps, standing like gravestones on the side of the banks, but a major replanting program is under way.

The new planting has been carefully planned, using a limited selection of tree species to preserve the canal (roots interlock at the water’s edge, reinforcing the banks) and attract a more diverse insect life.

In the village of Trebes, the new planting is predominantly white poplar; in Carcasonne, elm; in Narbonne, hackberry and turkey oak.

Now, instead of a continual tree tunnel, light pours onto the canal and from the water, views have opened across vineyards towards hills and mountains, which add to the cruise experience –such is the miracle of Mother Nature.

For a pre- or post-extension in Narbonne, Hotel d’ Residence is an elegant 19th century property just a 10-minute walk from the train station. It is a friendly establishment with free wifi, generous-sized ensuite rooms featuring a flat-screen TV and coffee-making equipment. A continental breakfast buffet is served in the elegant dining room.

Have you ever dreamed of cruising European waterways?