Many major religious pilgrimages have been cancelled or curtailed in an effort to contain the spread of COVID-19. These have included the Hajj, a religious milestone for Muslims the world over; the Hindu pilgrimage, known as the Amarnath Yatra high in the mountains of Kashmir; and pilgrimages to Lourdes in France.

Pilgrims have faced travel delays and cancellations for centuries. Reasons ranged from financial hardship and agricultural responsibilities to what is now all too familiar to modern-day pilgrims – plague or ill health.

Then, as now, one strategy has been to bring the pilgrimage home or into the religious community.

Journey of a thousand miles
Pilgrimage can be an interior or outward journey and while individual motivations may vary, it can be an act of religious devotion or a way to seek closeness with the divine.

Through the centuries and across cultures, those who longed to go on a sacred journey would find alternative ways to do so. 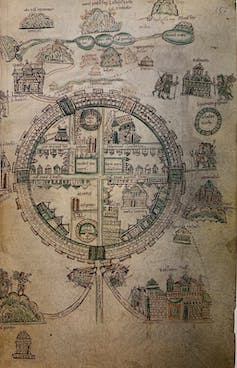 Reading travel narratives, tracing a map with the finger or eye, or holding a souvenir brought back from a sacred site helped facilitate a real sense of travel for the homebound pilgrim. Through these visual or material aids, people felt as though they, too, were having a pilgrimage experience, and even connecting with others.

One such example is the story of Dominican friar Felix Fabri, who was known for recording his own pilgrimages in various formats, some geared toward the laity and some for his brothers.

Fabri was approached in the 1490s by a group of cloistered nuns, meaning that they had professed vows to lead a contemplative life in the quietude of their community. They desired a devotional exercise so they could receive the spiritual benefits of pilgrimage without having to break their promise of a life that was sheltered from the outside world.

He produced Die Sionpilger, a virtual pilgrimage in the form of a day-to-day guidebook to Santiago de Compostela, Jerusalem and Rome. In these cities, pilgrims would encounter sites and scenes associated with many facets of their religion: shrines to honour Jesus and the saints, relics, great cathedrals and sacred landscapes associated with miraculous events and stories.

Fabri’s guidebook sent the pilgrim on an imaginative journey of a thousand miles, without having to take a single step.

DIY pilgrimages
My current book project shows that from Lourdes to South Africa, from Jerusalem to England, from Ecuador to California, DIY pilgrimages are not just a medieval phenomenon. One such example is Phil Volker’s backyard Camino. 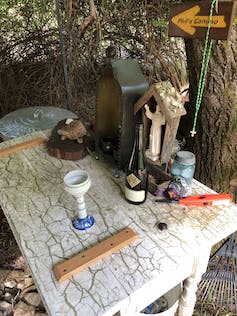 Volker is a 72-year-old father and now grandfather, woodworker and veteran who mapped the Camino de Santiago onto his backyard in Vashon Island in the Pacific Northwest. Volker prays the rosary as he walks: for those who have been impacted by the pandemic, his family, his neighbours, the world.

After a cancer diagnosis in 2013, a few things came together to inspire Volker to build a backyard Camino, including the film The Way, a pocket-sized book of meditations, Everyday Camino With Annie by Annie O’Neil, and the story of Eratosthenes, the Greek polymath from the second century BC who figured out a way to measure the circumference of the Earth using the sun, a stick and a well.

“For me, this guy was the grand godfather of do-it-yourselfers. How can someone pull off this kind of a caper with things at hand in his own backyard? It got me thinking, what else can come out of one’s backyard?” he told me.

Volker began walking a circuitous route around his 10-acre property on Vashon Island in the Pacific Northwest. It was a chance to exercise, which his doctors had encouraged, but also created a space to think and pray.

Each lap around the property is just over a half-mile. Realising that he was covering quite a distance, he found a map of the Camino de Santiago pilgrimage route to track his progress, calculating that 909 laps would get him from St Jean Pied-de-Port to the Cathedral of St James.

To date, Volker has completed three 500-mile Caminos without leaving his backyard.

Thanks to a documentary film, Volker’s daily blog and an article in the magazine Northwest Catholic, the backyard Camino has attracted many visitors, some simply curious but many who are seeking healing and solace.

The route rambles along roads and countryside from Hollywood to the ruins of the monastery that St Kevin, a sixth-century abbot, had founded in Glendalough. Postlethwaite had intended to travel back to her native Ireland in the spring of 2020 to walk the route in person, but due to pandemic-related travel restrictions, she brought the pilgrimage to her home in Daly City.

Every so often, Postlethwaite would check in on Google Maps to see where she was along the Irish route, pivoting the camera to see surrounding trees or, at one point, finding herself in the centre of an old stone circle.

Several joined Postlethwaite’s walk in solidarity, both in the US and elsewhere.

After each day’s walk, she paused at the shed at her community house, where she had drawn a to-scale version of the Market Cross at Glendalough.

As Postlethwaite traced the intersecting knots, circles and image of the crucified Christ with her chalk, she reflected not just on the suffering caused by the pandemic but also about issues of racism, justice and privilege. In particular, she remembered Ahmaud Arbery, a Black jogger shot by two white men in a fatal confrontation in February 2020. She inscribed his name on the chalk cross. 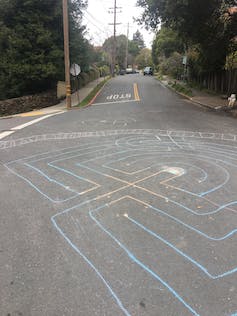 For Berkeley-based artist Maggie Preston, a DIY chalk labyrinth on the street outside her house became a way to connect with her neighbours and her three-year-old son. There is a link here with the medieval strategies for bringing longer pilgrimages into the church or community. Scholars have suggested that labyrinths may have been based on maps of Jerusalem, providing a scaled-down version of a much longer pilgrimage route.

They started out by chalking in the places they could no longer go – the aquarium, the zoo, a train journey – and then created a simple labyrinth formed by a continuous path in seven half-circles.

“A labyrinth gave us a greater destination, not just somewhere to imagine going, but a circuitous path to literally travel with our feet,” she told me.

As neighbours discovered the labyrinth, it began to create a genuine sense of community akin to that which many seek to find when they embark on a much longer pilgrimage.

‘Relearn to pretend’
Volker’s cancer has progressed to stage IV and he celebrated his 100th chemo treatment back in 2017, but he is still walking and praying on regularly. He offers the following advice: 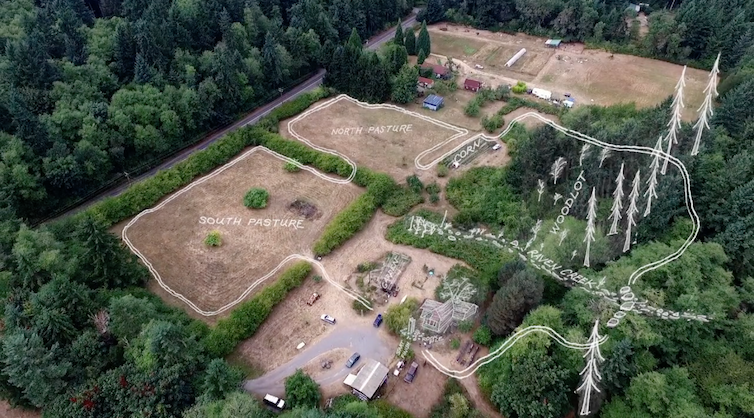 An aerial view of Volker’s backyard and map by Volker, from the film Phil’s Camino, directed by Annie O’Neil. Annie O’Neil’s documentary, CC BY

“For folks starting their own backyard Camino, I think that creating the myth is the most important consideration. Study maps, learn to pronounce the names of the towns, walk in the dust and the mud, be out there in the rain, drink their wine and eat their food, relearn to pretend.”

The ATS is a funding partner of The Conversation US.

Would you try something along these lines?

Are you ready to walk the Camino de Santiago?

You don't have to be religious to join the pilgrims on the Camino de Santiago.

Travel spots in your own backyard

Seven of Australia's top natural attractions that you should add to your travel list.