Madonna Thompson is a striking blue-eyed indigenous woman who exudes a gentle credibility and a deep intelligence. She tells us upfront that this is not her clan area; however, as one of just two boras (initiation ceremony of the Aboriginal and Torres Strait Islander people) left in Brisbane (down from hundreds pre-European settlement), this bush setting, within eyeshot of the Nudgee motorway, has an important story to tell. 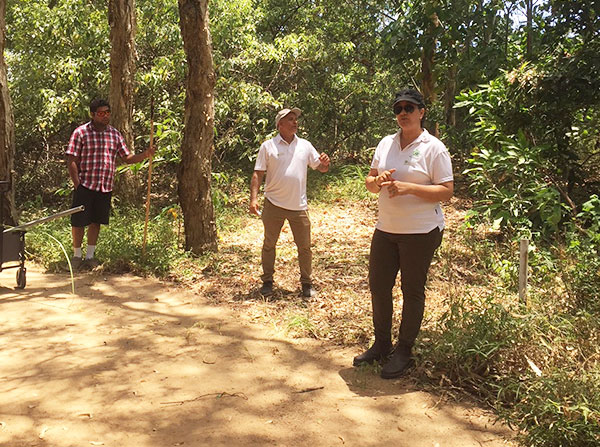 With her is Cousin James, a handsome chino-clad 30-something man, and Cousin Henry, a learner guide here to walk us through the important milestones that lead to the initiation ceremony, an ancient rite of passage that turns ‘young kippers’ (boys and girls) into what James describes as ‘useful members of society’.

The 90-minute tour kicks off with a smoking ceremony. Just.

Used to modern-day conveniences like a lighter, James wilts under the vigorous action needed to drill one reed into another to generate heat and sparks. What took his well-practiced ancestors less than a minute lasts a gruelling five under the mid-summer Brisbane blaze. 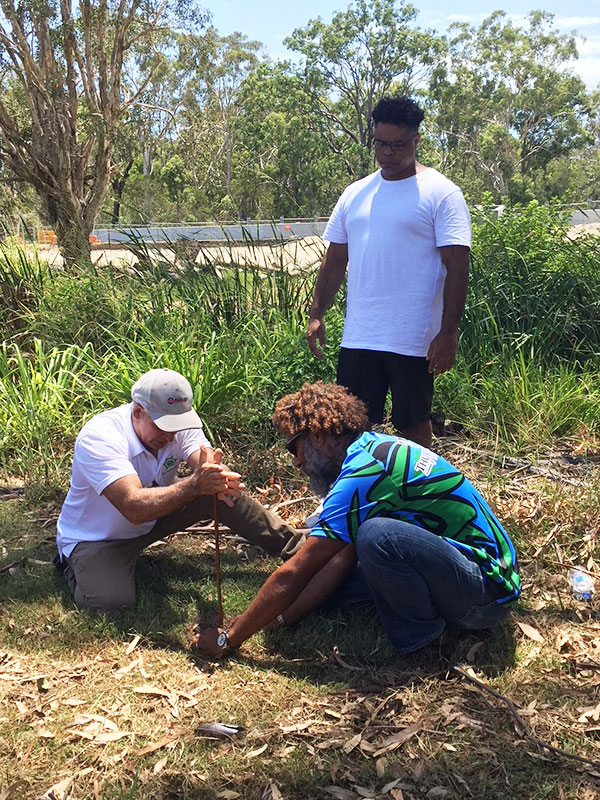 Miraculously, the world’s first matchsticks still work, and the clutch of dried grass cocooned around the rubbing sticks starts to smoulder and spark. James washes our bodies in the thick vapour while reminding us that smoking ceremonies like this were used for signalling, welcoming, and mostly, alerting the tribes to oncoming Europeans.

Our next stop is the nyanja or waterhole – what I call the world’s first IGA*. It’s a shop for locals, catering to the needs of the neighbourhood with ‘shelves’ laden with all manner of necessities: food, liniments, tools, toys, and the critically needed mosquito spray.

As we circle the waterhole, Madonna points out multiple uses for vegetation, much like her grandparents did for her parents, and her parents for her. 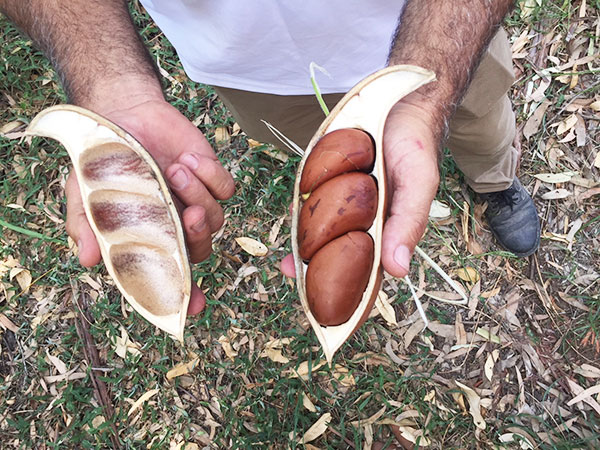 Take the bull rush, for instance. The base of the stalk is a source of fibre – toddlers quietly chewed on its mild broad bean flavoured tips à la rusk – while its leaves were stripped into fine pieces, dried, and twirled to make string for baskets.

Meanwhile, the Macaranga, a broad-leafed tree with a one-inch thick trunk is considered ‘the Swiss Army knife for kids’. The trunk was whittled down into a spear that is light and floats – ‘perfect if you miss your target’ – the leaves were used as a liniment to rub into cuts and sores, the bark to create rope, and the sap to help build tools. It’s the perfect tool.

The witchetty grub is next. And eating one is a lesson in protein and patience. These nutty treats are like having a bliss ball at the local deli, only slowly. Nothing in this ancient ‘shop’ is instant and youngsters first have to learn the art of identifying fresh pickings, tracing these up the tree trunk to the worm’s burrow, hacking out a hole near the entrance and then waiting. It could take 20 minutes, or two hours, until the resident worm crawls out to review the damage done to its home. Only at that point is the snack ready for consumption – raw or cooked, this is ancient bliss. 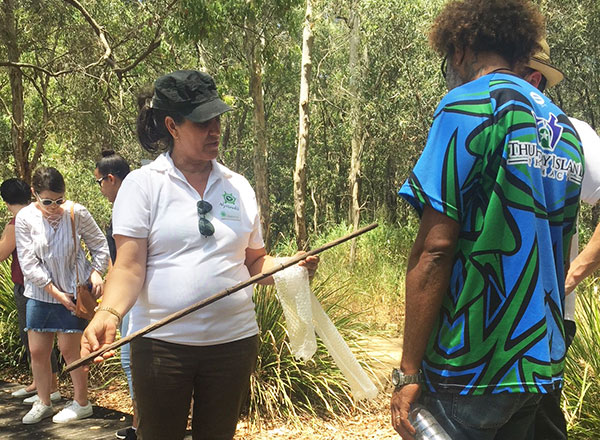 After gently reminding the young (and us) how to survive on nature’s gifts, it’s time for the final steps into adulthood.

A solemnity washes over the group. The men’s faces are painted in three red ochre stripes to signify the footprints of the emu, the clan’s totem, while the women’s arms are daubed with white ochre. Men first, we walk in single file to the bora ground, a 20-metre circle of lumpen earth and a place where song and dance erupted for generations, each time providing messages for the young to take on their journey into adulthood.

What we are looking at is thousands of years old. It’s a piece of dirt that has millions of stories. Much like the ones that Madonna has told us today.

More
Dive deep into the lives of Queensland’s longest living inhabitants on a 90-minute walking tour that recreates the moments of the final journey from childhood to adulthood with the Nyanda Cultural Tour in Brisbane’s northern suburbs. Along the way, venture through the bush to the Nyanda waterhole and one of just two bora sites remaining in Brisbane, and experience ancient cultural practices including a smoking ceremony, finding bush tucker and ochre (paint) making demonstrations. Led by the late Senator Neville Bonner’s descendants, tours run weekly on Monday, Wednesday, Saturday and Sunday.

Do you want to know more about Indigenous culture? What sort of tours have you taken that you can recommend to our members?