It feels like we’re circling. I look at the time. 19:48. My flight was due to have touched down by 19:55. I am booked on a 20:20 bus back to my house so I can get ready to front up at work with some sort of packed lunch and aura of refreshed motivation at nine am tomorrow. There is no way I am going to make that bus. Unless we nose dive straight into a bay next to an air bridge which I sincerely hope we don’t.

OMG. I remember I haven’t filled out a boarding card. Come to think of it, I don’t recall any mention of a boarding card. Most airlines usually have the decency to remind you you that may like to be organised and ask for one…

19:53. We’re definitely circling. I’m not made for plane laps. 19:55 was actually the revised time our flight was due to land. The flight I carefully booked was due to depart Rome at 17:30 and land at London Gatwick by 19:20, giving me a full hour to get to the bus, including collecting the bag I had checked in.

Sadly, as with all good things, my time in Italy with my mum came to an abrupt end on a Sunday in September. Having left in a taxi after breakfast to catch the train to her Cathay Pacific plane back to Melbourne, I was left to run around Rome for a further five hours before completing the same process to catch my less glamorous Vueling flight back to London – certainly no champagne on arrival in my case!

In an attempt to be a mature and responsible adult traveller, and knowing what Italians and Rome airport are like, I left myself plenty of time, arriving at the airport a full two hours before my flight in order to check in. Talk about living in the past – Vueling is one of the only airlines I know that won’t let you complete your pre-departure information if you have certain passports such as, say, an Australian one. Therefore you can’t check in and have to go and line up like you did a decade ago. Seems like times haven’t changed.

After making it through security, I was greeted with the delightful sign that my flight was estimated to depart at 17:55, not the best start given it was only 16:00. I headed to my gate to make the mature use of this extra time with free wifi and watch Made in Chelsea, I joke … and to do some work. 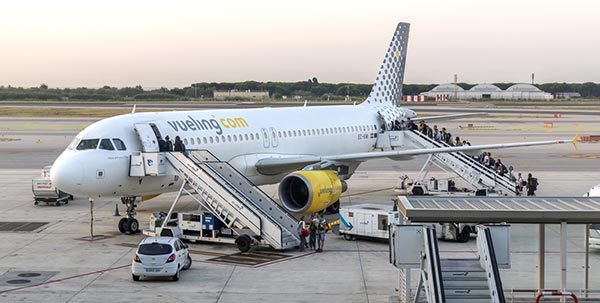 As it approaches 17:30 I note I am no longer sitting at the correct gate. No announcement has been made, I can just see that unless I would like to go to China at 20:30 my flight is not the next one from Gate Nine. After a lap of the airport including not one, but three, unhelpful conversations I establish from a TV screen I am now departing from Gate 10 and head back to stand where I was before as my seat has now been taken.

Having purchased Vueling’s version of ‘premium’ I am interested (read: unimpressed) to see not only do you not get any priority boarding, but when I do finally board there is no room in the overhead lockers. While we’re on the subject of things there are not, others include; seat pockets, and enough space to even put your bag under the seat in front, let alone your legs.

I will give them bonus points for the attractive male cabin crew member. Somehow this calms my fear of flying as I imagine he looks quite capable of saving lives and there would be worse people by whom to be saved. There is also a very attractive man in seat 3A but sadly I don’t see him again once we are onboard for three main reasons:

Other noteworthy moments on the flight included when I was stuck in between the two service trolleys and almost wished I was back in nappies given how badly I needed to go to the bathroom. And the bizarre music Vueling chose to play throughout the flight which sounds not dissimilar to emergency alarms. This may be to make up for the lack of actual communication. Although, to be fair, we were told we were travelling 11km off the ground at a speed of 842kms and the outside temperature was minus 53°C – always good stats for those with a fear of flying. Add in the final touch of turning the lights on and off without warning and you’ve got yourself a great recipe for thinking the worst.

20:39. As I stand at Gatwick in the queue for all other passports with 1,000 of my best friends, my Easy Bus long gone and halfway to London by now, I repeat two words over and over to myself; never again. Never again will I fly into a London airport at peak hour thus wasting an afternoon in Rome. And never again will I fly Vueling. Back to Easy Jet I crawl…

Related articles:
How to find the cheapest flights
Scooting out of Singapore
Airfares lowest in 30 years