It was 4am. The noise was so deafening, I hadn’t slept again. As the roaring wind whipped up my 1940s canvas tent, I spread my body out, hands and feet in opposite corners, clinging down onto my only shelter for the next 17 nights. Shivering in the pitch black, dressed in my 1940s Scottish attire, I was ready to admit that this wasn’t exactly the relaxed journey I’d had in mind.

This wasn’t the first time I’d been in an uncomfortable situation since I started following in the footsteps of history’s forgotten female explorers. The last time was in the Indian Himalayas, dressed in a 1920s yak wool coat, carrying a wooden backpack I’d made out of an old chair. Night temperatures were dropping to -15°C and, as I lay in my tent with frost on my forehead, my yearning for home was stronger than ever.

My interest in these women started at 16, when I discovered French-Belgian explorer Alexandra David-Neel’s memoir, My Journey To Lhasa. The book recounts the final stages of her 14-year journey through Asia to Lhasa, the forbidden capital of Tibet. She was the first European woman to enter the city and the first to meet the Dalai Lama. I was inspired by her determination and ability to travel in such harsh conditions, especially at a time when travelling for women was so unusual. 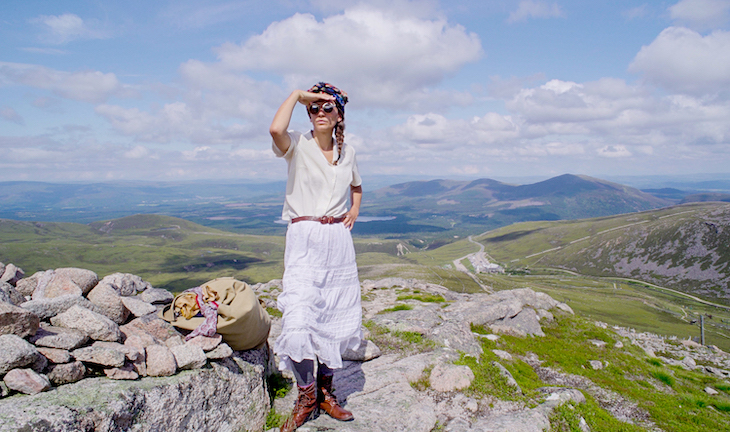 Alexandra’s book had a profound impact on me, and for the next 12 years, I often thought about her. After a bout of crippling anxiety throughout my 20s, I decided to re-read My Journey To Lhasa, attempting to find some of Alexandra’s strength in myself. This woman was fearless, and I wanted to be too.

I decided to follow in her footsteps, trekking through the Indian Himalayas towards Tibet. To understand what Alexandra would have really experienced, I dressed in her 1920s clothing, carrying only what was available to her at the time. This meant no modern equipment whatsoever.

After returning home to London, I began to research other women like Alexandra. There were so many fascinating stories, such as Freya Stark, who travelled to the Valley of the Assassins in Iran, and Annie Smith Peck, the first person to climb the north peak of the Huascarán in Peru. There was one woman in particular who really grabbed my attention, whose journey was a little closer to home.

This is how I ended up face down in a cold wet tent, following in the footsteps of Scottish explorer Nan Shepherd. Part funded from my own pocket, with sponsorship from adventure company Wilderness Scotland, I set off to discover Nan’s mountain world.

Her book, The Living Mountain, is a literary masterpiece, but surprisingly (even though she’s the face of the new Scottish £5 note), she’s widely unknown. 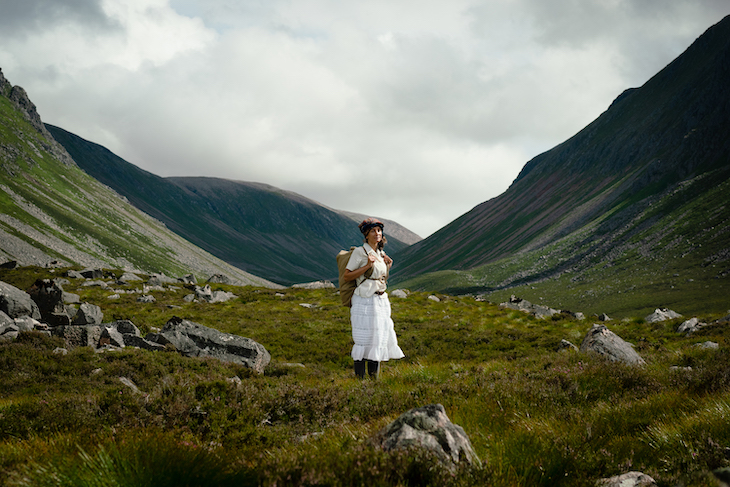 Written during the last years of the Second World War, The Living Mountain is Nan’s homage to the Cairngorm Mountain range in northern Scotland. The book was very much ahead of its time, in terms of structure and style, which is perhaps why – after being turned down by one publisher – Nan left the manuscript untouched in a drawer for over 30 years.

Kitted out in 1940s equipment, mostly from eBay, I set off to Aviemore, a small town south of Inverness. I was wearing a vintage tweed coat, leather boots, a cotton blouse and an itchy pair of high-waisted pants with a rather fancy rocket bra. My old army backpack was loaded with a heavy canvas tent, war-time food rations, blankets and emergency dry clothing.

Joined for the first part of my trip by camerawoman Emily Almond Barr, we walked from Aviemore, through thick pine forests leading up to the border of Cairngorms National Park. From the smallest elevation gain you could see for miles, the pine forests below now looking like huge blankets of dark green moss.

As we scrambled up small rocky paths towards the main peaks, black clouds rolled in and the rain poured down. With my backpack wet and heavier than ever, I knew I couldn’t carry on for much longer, but finding a suitable camping spot was harder than I’d imagined. The ground was steep and rocky, covered in bushy heather, which made pitching tents impossible. 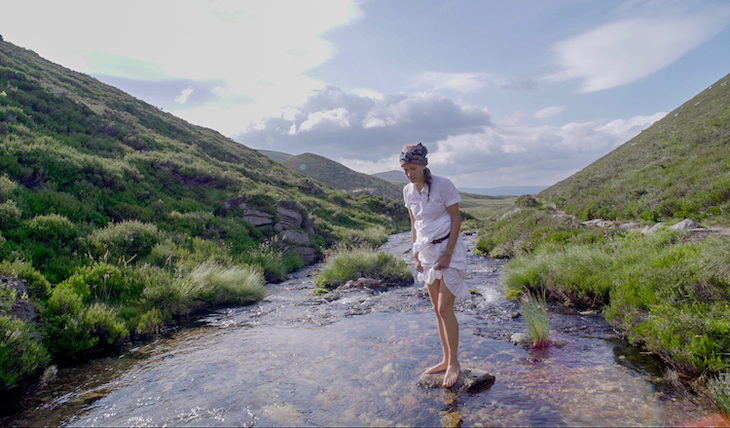 We had to keep walking, and headed towards a large valley below the peak of Cairn Gorm, with the hope that we would be sheltered from the worsening weather. For five nights we stayed there, fighting with our tents in the wind, walking when we could, hoping to see and experience some of the places Nan mentions in The Living Mountain.

Draped in half of my tent, which also doubled up as a ‘waterproof’ poncho, I wandered for hours through the mist and rain trying to reach places Nan talks about in her book. The weather, mixed with my old equipment, massively slowed our progress. It was frustrating to feel like we weren’t experiencing Nan’s whole journey, but after a few days, I realised that this was all part of understanding what she would have really gone through.

Before I knew it, it was time for Emily to go. I was apprehensive about being alone for the next 12 nights, but as I waved goodbye to my friend, the skies were beginning to brighten. The sun peeked out from behind fluffy white clouds, dappling the landscape with patches of green, some so dark they looked black, and others so neon bright they couldn’t be real. The rocks at my feet had their own decorations, cloaked with electric salmon pinks, duck egg blues and light purple mosses.

When the sun was out, and the wind just a breeze, the mountain paths were glorious. I walked for hours up to the top of Ben Macdui, the highest peak at 1309m, along the epic Lairig Ghru valley towards the Pools of Dee, the freezing water bubbling up from the ground, just like Nan described in her book. I watched tiny frogs hop between streams and deer chewing on grass, their young calves following them like a shadow. There were magical moments, like when the wind would suddenly drop, and there would be complete and utter silence. And then, finally, with the sun shining, I had my chance to plunge naked into the crystal waters of Loch Avon. Surrounded by giant mountains, hidden deep in the plateau, I tiptoed my way into the freezing cold water, thinking of Nan’s words: “Gazing into its depths, one loses all sense of time.”

Finally, I was beginning to understand Nan’s world on a deeper level. I went from cursing the bad weather to respecting it, understanding why the rain and wind needed to happen, to keep the ecosystem healthy and alive. I learnt to be content on my own, without my phone or modern equipment for distraction. I would write in my journal in the evenings, cook my wartime rations (potato and carrot stew) and read, falling asleep when the sun went down.

It’s magical moments like these that get me through the tough ones, and spur me on to continue this project.

Canongate recently republished The Living Mountain, but there are so many other female adventurers like Nan whose stories are being forgotten. This project enables me to get as close to these pioneering women as I can, to continue learning from them and telling their stories through platforms they never had. These women are gone now, but their voices can still teach us so much, and must continue to be heard.

Wandering along the Italian Riviera and Cinque Terre