Medications, being out of your routine and not getting enough exercise can all cause constipation. Seasontime/Shutterstock Clare Collins, University of Newcastle

Chronic constipation is incredibly common. Around one in four people worldwide report symptoms, while in Australia and New Zealand, it’s around one in seven.

Lots of things can trigger constipation: being out of your usual routine (think holidays, illness or injury), having a low fibre intake, not drinking enough water and inactivity.

Certain medications can also cause constipation including iron supplements, painkillers, diuretics (to help you get rid of sodium and water), and other drugs to treat heart disease, mental health conditions and allergies.

Constipation is more common in older adults and in women, due to hormonal changes that slow bowel motility – the time it takes for your body to digest food and expel the waste products (stools or bowel motions). Pregnant women are particularly prone to constipation.

How do you know you’re constipated?

If over a three-month period you answer yes to two or more of these symptoms most weeks, then you have “constipation”.

The good news is it can be treated and then prevented. 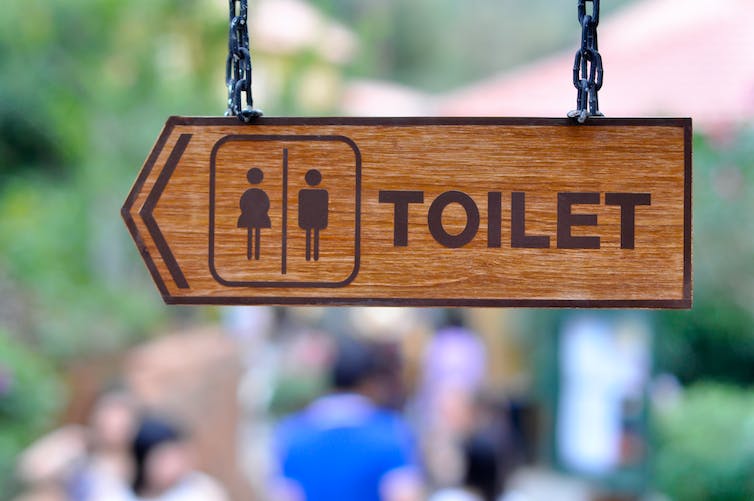 Women are more likely to become constipated than men because they experience more horomonal changes.

If your bowels are so packed you can’t pass any bowel motions at all, see your GP. You may need treatment with specific laxatives to clear your bowels before you can start on a prevention plan.

Here are four things that research shows improve bowel function, which refers to the time it takes for food to move through your digestive system and be expelled as a bowel motion (called gut transit time), the frequency and volume of bowel motions, and stool consistency.

1. High-fibre foods
Dietary fibres are complex carbohydrates that aren’t digested or absorbed in the gut.

Read more: Health Check: are you eating the right sorts of fibre?

A good source of fibre is psyllium. It forms a viscous gel, which gets fermented in the colon, leading to softer bowel motions. Psyllium is the main ingredient in Metamucil, which is commonly used to treat constipation. 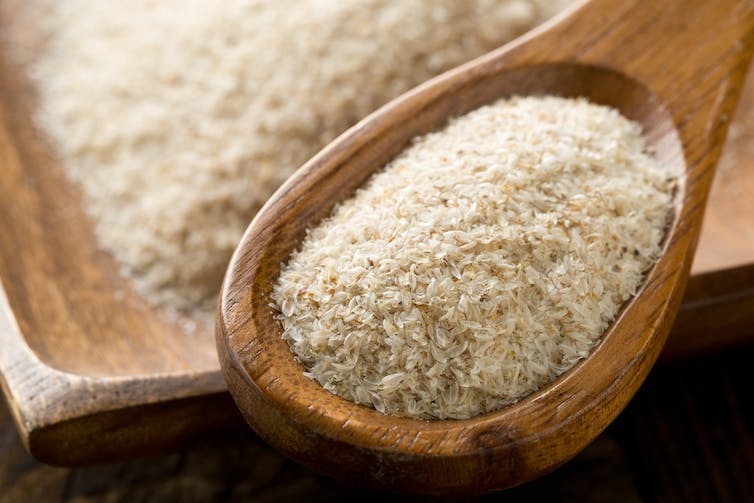 Psyllium is a type of fibre that helps soften bowel motions. Shawn Hempel/Shutterstock

A review comparing the effect of psyllium to wheat bran in people with chronic constipation found psyllium was 3.4 times more effective at increasing the amount of stool passed.

This is important because having a bigger bowel motion waiting in the colon to be passed sends signals to your gut that it’s time to expel the stool – and it helps the gut contract to do just that.

Read more: Multigrain, wholegrain, wholemeal: what’s the difference and which bread is best?

2. Kiwi fruit
Kiwi fruit fibre absorbs about three times its weight in water. This means it helps make stools softer and boosts volume by increasing the amount of water retained in bowel motions. This stimulates the gut to contract and moves the bowel motions along the gut to the anus.

In a study of 38 healthy older adults, researchers found adding two to three kiwi fruit per day to their diets for three weeks resulted in participants passing bowel motions more often. It also increased the size of their stools and made them softer and easier to pass. 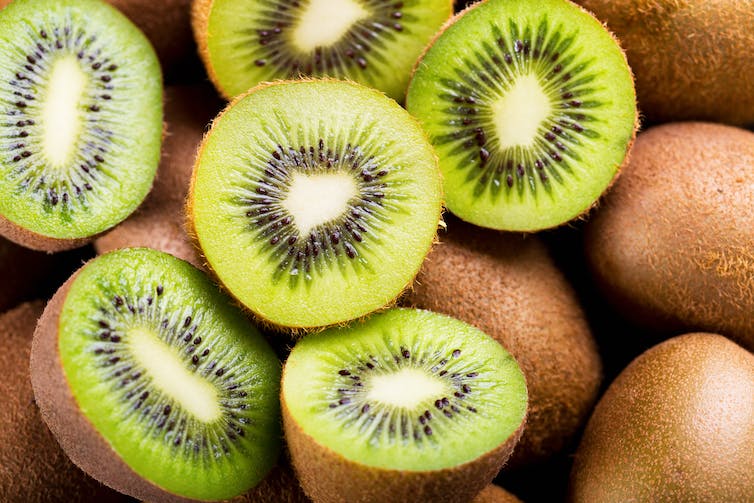 Kiwi fruit can help you go to the loo more regularly. Nitr/Shutterstock

Kiwi fruit are also rich in the complex carbohydrate inulin a type of fructan. Fructans are a prebiotic fibre, meaning they encourage growth of healthy bacteria in the colon.

But fructans can also aggravate symptoms in some people with irritable bowel syndrome (IBS). If you have IBS and constipation, check in with your GP before upping your fructan intake.

Read more: Explainer: what is irritable bowel syndrome and what can I do about it?

3. Prunes
Prunes are dried plums. They contain a large amount of sorbitol, a complex carbohydrate that passes undigested into the colon where bacteria ferment it. This produces gas and water, which triggers an increase in bowel movements.

Eating prunes is even more effective than psyllium in improving stool frequency and consistency.

One study of adults with constipation compared eating 100 grams (about ten) prunes a day for three weeks to those who ate psyllium. The prune group passed an average of 3.5 separate bowel motions per week compared to 2.8 in the psyllium group.

The prune group’s stools were also softer. They rated, on average, 3.2 on the Bristol stool chart compared to 2.8 for the psyllium group, meaning their bowel motions were more toward smooth to cracked sausage-shaped motions rather than lumpy ones. 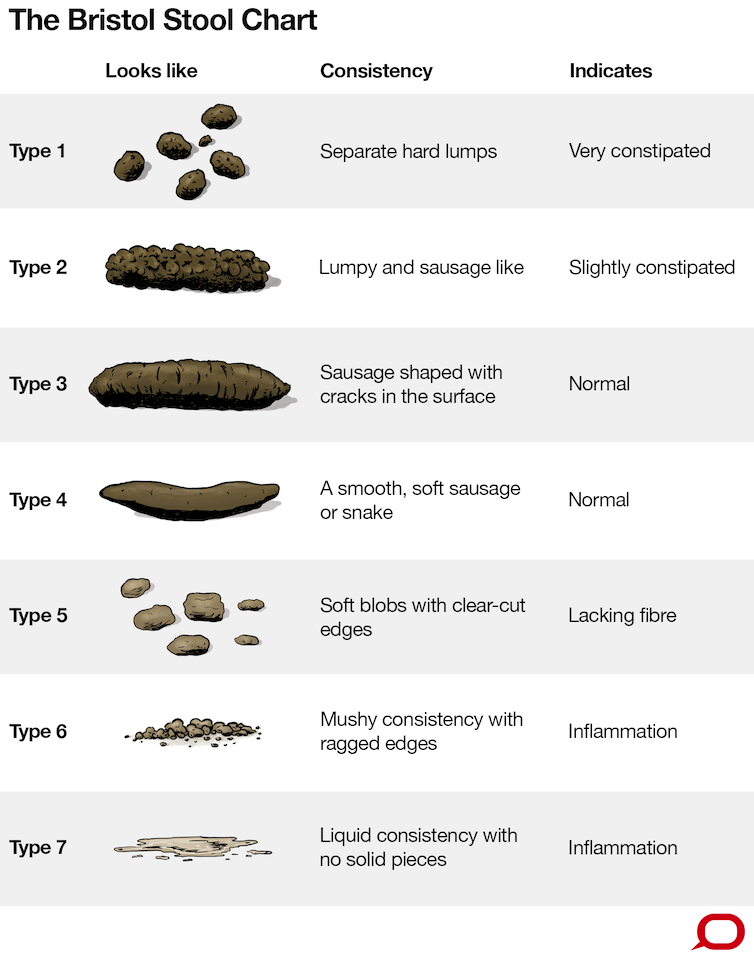 4. Water
Not drinking enough water is the strongest predictor of constipation. When your body is a bit dehydrated, there’s less water for the fibre in your colon to absorb, meaning your bowel motions also become dehydrated and harder to pass.

Aim for around 1.5 to two litres of fluid per day, which can include liquids such as tea, coffee, soup, juice, and even jelly and the liquid from stewed fruit.

Read more: Health Check: what your pee and poo colour says about your health

Putting it all together
Start by increasing the amount of water or other liquids you drink. You should be drinking enough that your urine is the colour of straw. 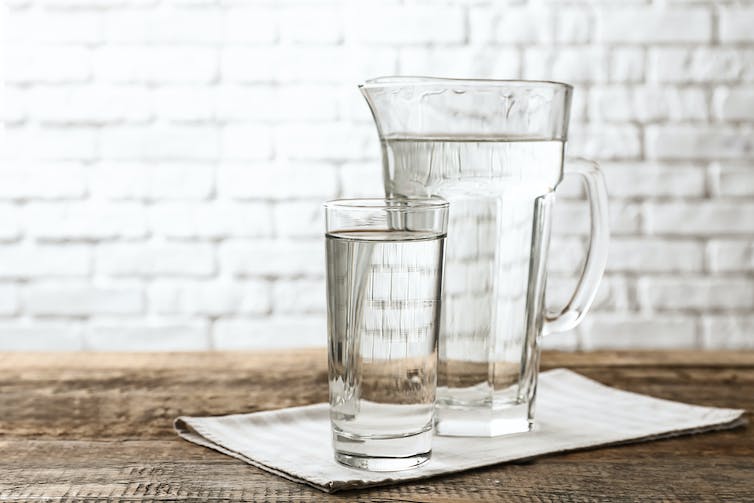 Aim for two litres of water a day. Pixel-Shot/Shutterstock

Next, add in psyllium. Start with a tablespoon once a day with breakfast cereal.

Psyllium forms a gel as soon as it comes into contact with liquids so to make psyllium more palatable, mix it with a small amount of stewed fruit or yoghurt and eat it straight away. If needed, increase psyllium to twice a day.

At least once a day, have some prunes (either dried or canned) or kiwi fruit and a variety of other foods high in fibre, fructans, sorbitol and fermentable carbohydrate.

If your bowel habits don’t improve, see your GP.

Did you know that kiwi fruit could help constipation? Do you have any other remedies that have helped you? If you enjoy our content, don’t keep it to yourself. Share our free eNews with your friends and encourage them to sign up. Related articles: Can scientists reverse ageing? Best exercise for your brain How flying affects your body Disclaimer: This article contains general information about health issues and is not advice. For health advice, consult your medical practitioner.