So we have at least six cruise ships sitting off the NSW coast, refusing to go home, even though Australia has refuelled/restocked them for the voyage and removed to ICU any sick crew/passengers.

Carnival is appealing to our government to reconsider  and repatriate hundred of crew and passsengers but Australians elsewhere around the world are not being helped buy other less "soft touch" countries, are they?

Anyone else fed up with stupid travellers/cruisers who still went on holidays in the middle of a global pandemic? We had to cancel our holiday plans, at considerable expense, and now we have to risk all we have done here in Australia because of greedy cruise companies allowing cruises to continue when they should have been stopped a long time ago.

And now we have the whingers in the hotels, the people  finally returning from overseas...one woman complained that the food she received was "carb overload".!  Really, lady?

If these foreign crew and passengers are allowed off the ships ( not inccluding the severely ill, of course, they must be helped) we are really in trouble. We will not be able to cope with the surge in illness.

I await criticism from those of you who feel we should welcome every fool who enters our waters but I do not care. We are a soft touch.

The cruise liners have been told to go but they refuse ... what to do ?

We keep taking any sick people of them ... which we are obliged to do under International Law.

They do not even pay any money for staying in our ports.

It is plain exploitation

"We are a soft touch"

The operator of the Ruby Princess cruise ship – one of nine cruise ships either docked in NSW or waiting off the coast .... has asked the NSW government to take a humanitarian approach to its crew members who are ill with COVID-19.

Perhaps that is why some countries have very few deaths/cases.

... These incubators sure would not help the situation

Interesting how the Active cases correspond with the incubator cruiseships.

So many took O/S travel and cruises when they knew about this virus -- and IMO thats their problem and although I feel for them they took a silly stupid choice and they should have to wear it,  we have not got the room in out medical place for fools such as that.

Also, those that are complaining t in fancy hotels and such I say tough luck get over it -- plenty worse of than you -- and at our expense too

Apparently there are some idiots that are planning to go for a cruise over Easter ??

A spat between cruise ships and government has been making waves on Australia's east and west coast, amid coronavirus shutdowns.

Enforcing that directive is much harder."

Six cruise ships are docked off the NSW coast, including the Ruby Princess

Latest news is NSW Police Commissioner Mick Fuller revealed five of the six ships off the coast would depart on Sunday.

Be interesting to see if it happens ?

A chain of emails, revealed last night by 9News, prove the department knew about the risk of coronavirus aboard the cruise

Seven of the ship's passengers are now dead, more than 600 are infected with the coronavirus, and hundreds of sick crew members are awaiting test results. 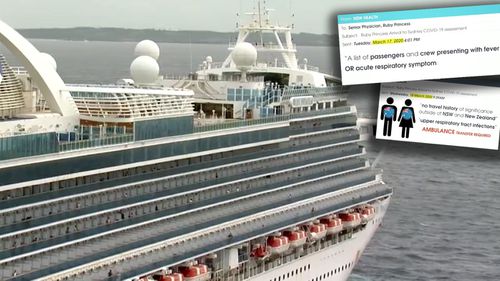 NSW Police described it as the largest peacetime maritime operation in Sydney's history, with more than 750,000 tonnes of goods transferred to the ships in 30 hours to allow them to leave Australian waters. Dubbed 'Operation Nemesis', police worked with the five ships to equip them with supplies, as well as to transfer crew between the cruise liners.

The Ruby Princess cruise ship remains in the waters off Sydney while crew await test results. Ruby Princess has had more than 600 COVID-19 cases and seven deaths.

... too bad about the Ruby Princess

...hopefully she will follow once the results come back.... negative ... fingers crossed.

I heard that there was going to be a class action taken agaist the Ruby Princess and maybe the NSW government also???

Apparently Princess Ruby is going to become a hospital

.... they are talking about docking it either in Newcastle or Port Kembla ?

The other five ships left after following a 14-day isolation period. All ships returned to their home ports with only crew on board.

The Celebrity Solstice, which had 12 COVID-19 cases among its passengers, has headed to Singapore, as has The Ovation of the Seas (84 cases).

The Voyager of the Seas, which had 34 cases as well as 5 crew members, was bound for Bali

The Ruby Princess has berthed at Port Kembla on 6 April 2020, the same day a criminal investigation is set to begin into the ill-fated cruise ship.

There have now been 11 deaths and 600 coronavirus cases connected to the Ruby Princess.

Border Force officers and health workers will board the ship and are expected to test about 200 crew members for coronavirus and deliver medical supplies. Two crew members, in need of medical assistance, were taken off the ship yesterday.

NSW Police Commissioner Mr Fuller said the ship needed to dock at Port Kembla, in Wollongong, for a number of reasons. “Taking sick crew and passengers off at sea is a complex and dangerous task,” he said. “So the ship will be docked ... we have used Port Kembla extensively over the course of this operation to refuel and resupply ships. So thank you to the Port Kembla dock and we will continue to make sure there's the highest level of security for the locals down in southern New South Wales.”

I can just see how the locals at Wollongong feel

but am glad they did not put it into the Newcastle Port which was the other alternative.

I was talking to a friend today, on the phone -- a retired seaman -- he said it will be a snow job and they will probably get away with it.

I hope he is wrong -- there are a LOT of things this government has to be pulled over the coals for yet -- all the sports rot with Bridget McKenzie and Angus Taylor and the like -- also Makalia Cash -- all quite on the front with all that crookedness, do they think we have forgotten that?

...all taking photos of themselves and each other with Princess Ruby in the background

and the police had to disperse them as they were not abiding social isolation rules.

Makes you wonder Suze, about the intelligence of some folks darn dead heads!

Authorities order all cruise ships to leave Queensland waters by midnight on 8 April 2020.

There had been nine cruise ships off the Queensland coast, with five of those already leaving. Two of the remaining four have already refuelled in Brisbane and are on their way, one is refuelling this morning with the final one due to leave by tomorrow.

The ships are not carrying any passengers, while crew will not be allowed to leave the ships.

How selfish of people still going on cruises when they knew about the epidemic and now screaming for the government ( taxpayers) to rescue them. Like many cancelled my plans to travel to visit family way before any bans or closed borders, and would welcome an hotel quarantine. My daughter who is a nursing assistant in an aged care home could infect me, as we live together, I have COPD is the government going to pay for me to stay in an hotel. I think not. Stop moaning you people.

The Diamond Princess docked in Yokohama back on February 9th should have been a warning beacon to all contemplating going to sea. It is now believed infections were spread on the Diamond Princess by 15 infected kitchen staff. The cruising companies were absent in warning passengers before they boarded of potential problems. The Australian passenger charged $8,000 for a few days in the ship's infirmary, and not allowed to disembark until the bill was settled, shows the uncaring greed of passenger ships. But the cruise line's day of reckoning may come about. Share markets punished companies with a drop in excess of 80%. With ships being labelled 'toxic time bombs' and 'floating Petrie dishes' I doubt many will view cruising as the carefree escapes they once were. One thing for sure, I will not board any ship with Princess in the name.

The problem is compounded by the rules surrounding boating. Whether you are the master/skipper of a tinny or a cruise ship, the master is responsible for all on board. Not only must he or she navigate the waters safely, but they must also ensure life-preserving devices are in order. Just as when a ship is caught in a storm, or grounded by mechanical failure, the master of the vessel is responsible for those onboard. It is also a rule of the sea that if a boat nearby is in trouble, the ship's master must do all possible to help the stricken craft. You would think this also extended to the safety of provisions and health. To this extent, the master keeps a detailed ship's log. So who is at fault with the spread of coronavirus? The ship's captain for not informing passengers the boat was in trouble, or the cruise line owners? Perhaps both share the blame.